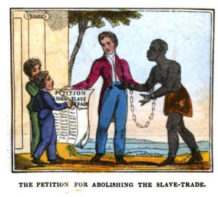 Screenshot from the book 'The Black Man's Lament; Or, how to Make Sugar.'

Children around the country gave up sweets and cakes hundreds of years ago as part of a sugar boycott to protest against slavery, a study shows.

The research shows the scale of children’s involvement in the abolitionist movement, from avoiding all products made from sugar, and learning about the horrors of the slave trade as part of lessons at school.

Dr Ryan Hanley from the University of Exeter and Professor Kathryn Gleadle from the University of Oxford found young people were influenced by their parents and abolitionists to protest, but many of their actions were taken independently. For instance, girls as young as nine invested dozens of hours of their leisure time producing intricate needlework with anti-slavery themes.

In late eighteenth- and early nineteenth-century Britain children were especially active in the boycotts of sugar produced by enslaved people. Many of those grew up to be leading lights in abolitionism and other reform movements.

Researchers examined hundreds of newspaper reports, manuscripts and letters as well as the diaries and notebooks of Katherine Plymley, a member of the Shropshire gentry, which provide one of the most detailed insights into children's responses to the British antislavery movement.

Plymley was the sister of the local archdeacon, Joseph Corbett, a key figure in the antislavery movement, and cared for his children.

In April 1792, she recorded the family's early history of sugar abstention and said: “I have before noticed in this particular instance as among those children who are inform'd on the subject I have heard of more readiness to give up the use of sugar than among grown people.”

In 1792 Katherine wrote that her seven-year-old nephew Panton had been refusing to have his shoes shined because he had heard that the polish contained sugar. She also recorded how Panton and his two sisters Jane and Josepha spent time chatting and putting together a jigsaw puzzle of Africa with her friend, the anti-slavery campaigner Thomas Clarkson. After discussing the issue with Clarkson, young Jane declared that she would only eat sugar grown in the new abolitionist colony of Sierra Leone.

The family were also visited by the famous black abolitionist Olaudah Equiano, who chatted at length with the children about anti-slavery and gifted them a signed copy of his autobiography, The Interesting Narrative.

Many nineteenth-century notables recalled taking part in the abolitionist sugar boycotts of the 1790s and 1820s as junior ‘anti-saccharists’. Looking back on her childhood in Bristol in the 1820s, the physician Elizabeth Blackwell claimed that the ‘children voluntarily gave up the use of sugar’ because it was a ‘slave product’. Scientist Mary Somerville remembered taking ‘the anti-slavery cause so warmly to heart’ as a girl that she ‘would not take sugar in my tea, or indeed taste anything with sugar in it’. Thomas Fowell Buxton, who in the 1820s took over from William Wilberforce as the leader of the parliamentary campaign, claimed that he was first made to think about slavery as a young boy because his sister Anna participated in the boycotts.

Those below the age of fourteen were discouraged from signing antislavery petitions. However, direct appeals to children changed over time and widespread production of antislavery literature for children was common in 1820s and 1830s Britain. Some campaigners solicited more decisive involvement, for instance by exhorting children to contribute financially to the cause, especially after the boycotts of the 1820s.

Scattered references about day-to-day teaching in schools suggest that children were sometimes placed under considerable emotional pressures to declare their support for the cause.

Dr Hanley said: “Children have been known to be involved in anti-slavery activism, but until now it wasn’t clear if this was as a result of their own efforts, or the influence of their parents or teachers. We know some parents banned them from having sugar and schools encouraged young people to celebrate the abolition of slavery, bribing them with sweets and toys to mark the occasion.

“Children used the anti-slavery movement to negotiate their own place in the world. Sometimes they were the first members of their families to abstain from using sugar and they also encouraged their parents to do it. In other cases,  children questioned their involvement to leverage authority over their own lives.

“Hundreds of years ago children had a political voice and they used it. They made their voice heard on contemporary issues and this is an example of that.”