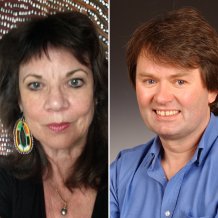 Two University of Exeter academics have been elected fellows of the British Academy.

Professor Regenia Gagnier and Professor Ian Bateman are among 86 new fellows elected for their work in the humanities and social sciences.

Professor Bateman, of the department of Economics in Exeter's Business School, is an environmental economist with a wide array of research interests.

Professor Gagnier, of the department of English, also has a wide range of specialisms – including Victorian and modern Britain, migration studies and the global circulation of literatures and cultures.

"When I arrived at Exeter from Stanford in 1996, I was delighted to find invitations from all over the UK from peers generously including me in the activities of the discipline," Professor Gagnier said.

"Now I’m doubly delighted to be included in this distinguished circle of the Academy signifying the ultimate acceptance of a foreigner (when I first came to Exeter, a colleague was bemused that an American could be professor of English).

"I thank my Exeter colleagues and students for their intellectual intensity, collaboration, and affection over 24 years, and I eagerly anticipate more committee meetings, peer evaluation, grant-reviewing, and other business of the Academy as it fulfils its most important mission.”

Professor Bateman, Director of the Land, Environment, Economics and Policy Institute and a member of Exeter's Global Systems Institute, said: "The British Academy is leading the international field in recognising the importance of environmental economics to human wellbeing and to tackling the most major challenges facing the planet.

"I feel very honoured and fortunate to be included within such a fabulous group of academics.”

Professor Sir Steve Smith, Vice-Chancellor of the University of Exeter, said: "This is a truly well-deserved honour for two academics whose work leads the way in their respective areas of expertise.

"Becoming fellows of the British Academy is apt recognition of this, and they can be incredibly proud of their achievements.”