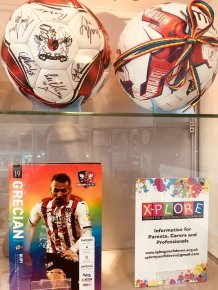 The museum has a mixture of permanent and temporary 'guest' exhibits

Collecting footballing memories for the future

Exeter City Football Club’s Grecian Archive has been gathering ‘memories for the future’ with the help of the University of Exeter.

Researchers at the University of Exeter are asking ‘what is the heritage of now?’ to ensure that current events and items are correctly documented and preserved for people to look back on in the future.

Gabriella Giannachi, Professor in Performance and New Media, initially led the creation of the archive to catalogue historic items and try trace their history. Now, she is using those historic documents to engage fans with the history of the club they love while also asking them to document current events for future memory.

“We are regularly documenting events, making sure that we preserve the clubs’ history for the archive. We don’t just document what happens on the ground, we also document the work of volunteers, the experience of coming to the ground, and what it means to people.”

Since 2015, the Grecian Archive online content has more than 600,000 page views from 144 different countries. These have shown a significant rise during the pandemic, indicating that during lockdown the archive has offered people a way to remain engaged with the club.

Dr Will Barrett, project coordinator has worked alongside Professor Giannachi to help develop the club’s archive from a cupboard stuffed full of historic items to one of the largest digital archives in sporting heritage, whose items are now exhibited across the whole stadium, including a museum room which hosts a permanent collection but also launches temporary exhibitions such as Justin Fashanu’s exhibition whose curatorial effort will also be captured in a film to be released this Autumn.

Dr Barrett said: “Working directly with people to collect, preserve, share and celebrate the history and heritage of Exeter City Football Club and its community, has been central to our work throughout, and has been a hugely significant factor in exploring and displaying a range of themes all across the stadium.”

“The Justin Fashanu exhibition is a great recent example of this, and through working with Alan Quick from the club’s One Game One Community group, we have been able to share a powerful story through co-curation.”

“It has also allowed us to collectively celebrate the heritage of the club, from its foundation in 1901 as St Sidwell’s United to the modern era, and our latest display, which celebrates the 20th anniversary of the Supporters’ Trust, is there waiting for fans when they are able to return to the ground.”

Over the years, the project has received significant funding and support from the National Lottery Heritage Fund and the South West Heritage Trust.

Tim Bland Engagement Manager for the National Lottery Heritage Fund said: “The Heritage Fund has been excited to support the heritage collaborations between the University of Exeter and the Exeter City Football Club Museum Trust.

“These projects, (made possible by National Lottery players) have engaged a wide range of people with the history of not only the football club and the St James Park stadium, but also the wider history and heritage of sporting and cultural engagement across Exeter. These projects are perfectly in line with the Fund’s outcomes as detailed in the most recent funding framework."

Brian Carpenter, Community Learning Officer for the Devon Archives and Local Studies Service, part of the South West Heritage Trust, said: “It has been a pleasure to work with Professor Gabriella Giannachi, Dr. Will Barrett, and other members of the Exeter City FC History Group on the establishment of the Exeter City Museum and Trust.

“The increased recognition of the value of sporting heritage over recent years has been a very welcome development as it has given organisations such as ourselves the chance to work with clubs which have played significant roles in the sporting landscape of the nation. In the case of Exeter City, the club has been an important part of the sporting and cultural life of the city since the early twentieth century, and the recent Lottery-funded projects, including the one which led to the creation of the museum, have brought that rich history to life.

“We look forward to continuing our partnership with the club into the future.”

The Grecian Archive team are regularly asked for requests of materials from a number of local and national museums and foundations. The museum, now part of South Devon Museums, is continuing to co-curate sporting heritage exhibitions and promote wellbeing activities with fans and volunteers. A number of sport organisations have since sought advice on how to research and curate their history into their own archive and/or museum.