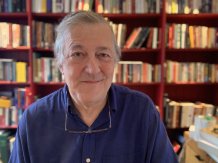 Stephen Fry, one of the UK’s best loved and most prodigious talents of the small and big screen, will give a fascinating insight into his influential and innovative work, during a special event at the University of Exeter.

Stephen will be the star attraction at the forthcoming online ‘Creative Dialogues’ event, hosted by the University on Tuesday, January 19th.

During the event the actor, writer, film director, historian and broadcaster will discuss his extraordinarily broad range of talents and achievements, as well as explore his creative modus operandi and his philosophical and sociological perspectives.

The free event will be hosted by film director, producer, screenwriter and novelist Don Boyd, who is also an Honorary Professor in Film Practice at the University of Exeter.

Speaking ahead of the event, Stephen Fry said: “I am so greatly looking forward to my Exeter Creative Dialogues event next week. I expect the conversation to range free like a wild mustang of the plains, kicking, snorting, bucking and prancing.  Don Boyd was the first producer / director of films I ever worked for and I know we will have so much to talk about when it comes to the creative experience, performance and much, much more besides.”

Fry's acting roles include an award-winning performance as Oscar Wilde in the 1997 film Wilde, Melchett in the BBC television series Blackadder, Peter Kingdom in the television series Kingdom, Gordon Deitrich in the dystopian thriller V for Vendetta, Mycroft Holmes in Warner Brothers’ Sherlock Holmes: A Game of Shadows and The Master of Laketown in Peter Jackson’s Hobbit.

He played a Georgian presidential candidate in HBO’s Veep and Roland in CBS’ series The Great Indoors. He has also written and presented several documentary series, including the Emmy Award-winning Stephen Fry: The Secret Life of the Manic Depressive, and was the long-time host of the BBC television quiz show QI.

The award-winning Out There, documenting the lives of lesbian, bisexual gay and transgender people around the world is part of his thirty year advocacy of the rights of the LGBT community. He has been President of Mind, Britain’s largest mental health charity, since 2011 and an honorary fellow of the Royal College of Psychiatrists for over ten years.

As well as his work in television, Stephen has contributed columns and articles for newspapers and magazines, appears frequently on radio, reads for voice-overs and has written three volumes of autobiography, Moab Is My Washpot, The Fry Chronicles and his latest, More Fool Me.