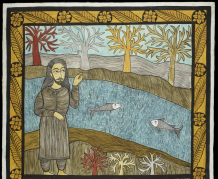 Remarkable new artwork depicting famine in Britain and India will be on show for the first time to allow communities to reflect on today’s food and environmental crisis.

Beautifully illustrated scrolls and graphic art storytelling traditions will help communities discuss shared histories of famine in India and Britain and how to cope with current environmental changes.

Researchers hope making people aware of the history of food shortages can enable them to make sense of the issues they are facing today – including poor food security, biodiversity, soil nutrition, and climate change.

Professor Ayesha Mukherjee, from the University of Exeter, working with colleagues from Jadavpur University and the British Library, has collaborated with urban graphic artists in Calcutta and traditional scroll painters from Naya village in West Bengal, who have produced new artworks depicting selected episodes of early modern famine.

People can see the scrolls and artwork at an exhibition at the University of Exeter. Professor Mukherjee and colleagues will also run a workshop – open to all – where participants can reflect on food security in their own lives and work together to produce a new scroll depicting the messages they discuss.

Professor Mukherjee said: “It has been a pleasure and a challenge to conduct a project that enables academic research on famines of the past to be channelled into stories told by modern communities of artists, who engage with food insecurity in their own ways. There’s much to learn from their perspectives on the past, and from the cross-cultural sensitivity and insight in their artwork.”

Professor Mukherjee has worked with Professor Amlan Das Gupta, from Jadavpur University, Calcutta, on an AHRC-funded project to create an online database exploring the cultural histories of famine and dearth in early modern India and Britain. People can search texts in ten languages. The database maps the parallel experiences of famine in India and Britain using evidence from hundreds of historical and literary sources, including poems, plays, sermons, biographies of saints, travel journals, official papers, paintings, and folk tales.

Their research findings are now represented in the remarkable artworks by Indian graphic artists and scroll painters, who have used the database.

Communities in Renaissance England faced repeated food shortages. The most serious dearths occurred in 1555-1557, 1586-1588, and 1594-1598. It was a time of gathering crisis; not only did crops fail, but the population increased, prices rose, and war and diseases broke out. England saw increased levels of vagrancy, destitution, and food riots, especially in the north and west where markets were less accessible. In their artwork the patachitrakars of Naya and the graphic artist Trinankur Banerjee represent historically renowned figures like Queen Elizabeth I and William Shakespeare, creating a persona of "Shekkhopir" - drawing on a nineteenth-century colloquial Bengali appropriation of "Shakespeare".

The failure of the rice crop in 1768, the lack of rainfall in following years, peasant migration, and the small pox epidemic led to one of the most notorious famines in Indian history, when 10 million people are said to have died. The artwork depicts the ecology of the predominantly rice-growing Bengal lowlands. The graphic artists reflect on its social impact, depicting an imaginary dialogue between the graphic artists themselves and the historical figure of William Hunter, the colonial administrator who meticulously assembled and analysed historical records of this famine.

Shrutakirti Dutta, Project Fellow from Jadavpur University, said: “Something that drew me in was to see how the stories were interpreted by the scroll painters and the graphic artists and how the same story can take very different iterations depending on the media chosen and also the artists own lived experience.

“I think now more than ever, it's really important to reflect and learn more about communities that face food insecurity, and to see the long experience of food scarcity that has featured in literature and in music and in art; but to see that here, from the present point of view, being reinterpreted through the lens of current, ongoing scarcity and hardships that plague us. I think that's why the project is particularly pertinent in the present day.”

The exhibition, in the Forum building on the Streatham campus, will be open from 9th to 11th November from 10am – 4pm and the workshop, at the Digital Hums Lab, will take place on Saturday 13th November from 11am to 1pm.

Both the exhibition and workshop are open to academics, students, families and local residents.

For more information about the project and the exhibition, visit faminetales.exeter.ac.uk or find us on Twitter and Instagram at @faminetales, Facebook: Famine Tales from India and Britain.