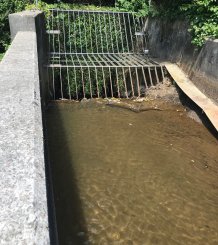 The events take place over the early May Bank Holiday weekend – on 30 April and 1 and 2 May.

A major new poem inspired by Cornwall’s unique Red River – the most “unnatural” in the UK – will be premiered at Tate St Ives.

The Red River in West Cornwall runs from Neolithic standing stones on the moors above Camborne to Gwithian in St Ives Bay and all seven miles has been altered by tin-mining. While little more than a stream, it has played an important part in Cornwall’s industrial revolution and, by extension, the development of hard-rock mining around the world.

Writer and researcher Dr John Wedgwood Clarke, from the University of Exeter has traced the history and biology of the Red River as part of a major project to change people’s idea of what is considered to be beautiful, and help more people develop an emotional connection with nature.

The Red River has a personal connection for Dr Clarke, who grew up in St Ives and surfed at its mouth as a teenager when it was a dumping ground for mine waste staining the river red.

Dr Clarke will give readings from his new poem and showcase a film, a poetry sound piece, and other artworks made as part of the project at the Tate St Ives next month. There will also be an exhibition of artefacts connected to the poem and of work by artists responding it, and creative writing workshops.

Dr Clarke said: “The Tate St Ives is the perfect location to premier the poem – which I’ve worked on for two years – because you can see across to Godrevy where the Red River ends. People can hear me read from the poem and see maps and historic documents about the Red River, as well as contemporary artistic responses to my work.

“People will also be able to find out about work now to protect and promote the biodiversity of the river.”

The events are part of the Tate St Ives’ “Last Weekend” celebration of regional connections to the exhibition 'Thao Nguyen Phan' and the collection displays ‘Modern Conversations’. As well as the Red River events there will be the first performance of artist Rita Evans's new work 'Stringing the Matrix' commissioned by Tate St Ives.

On the Sunday people can get creative in a workshop run by Tate Collective Producers, developed with artist Ben Sanderson. On Monday Tate St Ives is host to the Cornwall International Male Choral Festival and a special talk delivered by social historian Janet Axten researched and written by Dr Gregg Huff, from the University of Oxford, a historian on the Vietnam famine of 1944-45 a key reference point for the work of Thao Nguyen Phan. Throughout the weekend there will be talks in the galleries with the members of Tate St Ives staff on their research into the artist’s work.

The events take place over the early May Bank Holiday weekend – on 30 April and 1 and 2 May.