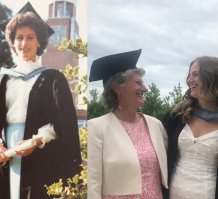 When Claire Cooper graduated in 1982 she couldn’t have imagined she’d be back in the same building exactly four decades later – this time watching her daughter Natasha have the same joyful experience.

The pair now both have degrees from the University of Exeter, with Natasha a new English graduate while Claire studied history.

Students in 1982 had lived through the Falklands War and anti-apartheid protests. Claire and her friends queued overnight to buy tickets for Genesis. Student life in the 2020s has been very different for Natasha, but mother and daughter have both enjoyed Exeter’s beautiful campus and city life.

Claire said: “Of course I graduated never thinking one of my children would follow in my footsteps but it’s been lovely that Natasha and I both had such good experiences at the same university. I’ve been able to return to Devon as my parents live in Exmouth, and my sons, who are older than Natasha, came on open days to the University of Exeter, so I had seen the campus since. It’s funny to see so much change on campus but also what remains the same, like Reed Hall and the beautiful grounds.”

Both Natasha and Claire lived at the Duryard halls of residence during their time at Exeter – Natasha for a year and Claire for her entire time at university. In the 1980s students shared bathrooms, ate together in the refectory and battled over the use of a limited number of landline telephones.

They attended formal dinners and collected post from their family from porters. Current Duryard students have ensuite bathrooms and most make their own meals.

Natasha, who graduated this week, and Claire, who live in Amersham, Buckinghamshire, have both enjoyed exploring Devon’s countryside and coasts.

Claire, who was a member of the university’s history and outward-bound societies and played badminton and tennis, said: “I’ll always remember being dropped at Paddington Station by my parents to board a special train for Exeter students, and then my luggage following me – we didn’t bring as much then. We lived on campus for the whole three years, so my experience of Exeter was different, but Natasha and I have both liked meeting friends in local cafes and bars and exploring Devon.”

After graduating Claire went on to a graduate secretarial course and then worked in PR, the pharmaceutical industry and in libraries. Natasha is due to begin training as a secondary English teacher at a school in Buckinghamshire in September.

Natasha, who sang in the university’s Contemporary Choir and played netball and boxed as a student, said: “A highlight of my time at Exeter has definitely been the course. I loved the content and having so much choice over the modules I could study. I specialised in early modern literature and had such fantastic support and teaching from lecturers, who I will really miss.

“Of course my studies were disrupted by the pandemic, but we’ve been able to have a fairly normal last year so it feels as if we’ve finished on a high.

“Exeter’s been such a lovely city to be in. I’ve really enjoyed living off-campus near the city centre and being part of the community, getting to know neighbours and the landlord of our local pub. My friends and I have loved going to Exmouth, going out to coffee shops and for cocktails and going for walks. My grandparents are in Devon so I’m glad I’ll be still visiting the area.”