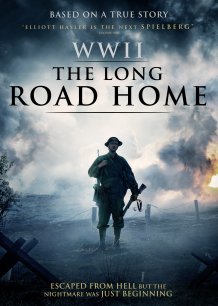 The UK’s youngest feature film director has been inspired by his great-grandfather’s epic battle for survival during World War Two for his debut movie.

Inspired by Elliott’s great-grandfather’s own experiences, WWII – The Long Road Home depicts an escaped British POW’s epic battle for survival whilst on the run in war-torn Italy, as his wife and young son anxiously await news in England.

Filming was completed when Elliott was just 16 years old, with the debut shot across five countries and spent three years in production. It is due to be released on Amazon, Sky Box Office, iTunes, and on DVD in major supermarkets on 26 October.

Elliott said: “My inspiration came in two forms. There was the creative element which came from my love of epic cinema, in particular the films of David Lean such as ‘Lawrence of Arabia’, and also in a narrative sense in that I’d grown up hearing these stories about my great-grandfather and his wartime exploits, passed down by another member of the family. I’d always been fascinated by them and their epic nature. So really the two went hand in hand in terms of giving it the ‘movie treatment’.”

WWII – The Long Road Home originally premiered when it was called Charlie’s Letter’s in 2017 as part of the Edinburgh and Brighton Fringe Festivals. The film was lauded by critics, with Culture Trip magazine citing the film “a miracle” achievement, and film critic Graham Fuller describing Elliott as “the next Steven Spielberg.”

All of Elliott’s films so far have had a historical aspect to them, particularly with his current film Vindication Swim, which tells the true story of Mercedes Gleitze, the first British woman to swim the English Channel. The aim is to release the film at Cannes Film Festival in 2022.

Elliott said: “Its historical films which I’m most drawn to both creatively and in terms of inspiration, so doing a history degree really works well in terms of discovering unique stories that translate well into celluloid.

“Combining filmmaking with my studies has been absolutely fine. I’ve managed to allocate ample time to dedicate to both whilst I’ve been at university so far.”