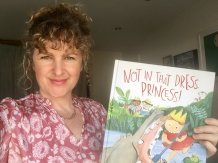 A sexist encounter at a petrol station has inspired a new children’s book designed to encourage children to follow their dreams and challenge outdated gender expectations.

Three years ago, Dr Wendy O’Shea Meddour was putting oil in her car at a garage, dressed in a beige polka dot dress, when a man asked her if she needed help. She politely declined, which prompted him to come over and start shouting: 'Think you can do a man's job, do you? And in a ******* dress”.

Despite numerous years teaching feminist theory, Dr O’Shea Meddour, a prize-winning children’s author and University of Exeter creative writing expert, found herself too shocked to reply. Instead, she went home and wrote: Not in that Dress, Princess! Published on International Women’s Day, the funny rhyming picture book is already being met with critical acclaim and has been praised as being “a spirited riposte to gender stereotypes”.

It features Bess, a girl who hates being a princess because her brothers can do anything they want, while she is stuck inside the palace in her dress.

Bess feels trapped after the Queen tells her she can’t climb a tree – “not in that dress” – and she has to stay inside with her governess. But Bess decides to show them that they’re wrong, saying “just watch me” before skipping up a mountain, dancing with a wizard and playing with some wild animals.

Bess proves there’s nothing you can’t do in a dress. From counting to splashing, skipping and hopping, her ambitions get bigger and bigger. She even goes on safari, flies an aeroplane and zips off in a red Ferrari, an appropriate reference to the incident at the garage.

At first the Queen is embarrassed by her daughter’s behaviour, but soon she becomes impressed. Even Bess’s brothers want to be like her and by the end of the book, are wearing dresses too.

Dr O’Shea Meddour said: “I’d like to thank the rude man at the garage who inspired me. If it wasn’t for him, this book would have never been written. Not in that Dress, Princess! encourages children to follow their dreams and do the things they love, no matter what anyone else says or thinks. Bess wants to ‘have fun and make mess’, not sit in a corner looking pretty, and no-one’s going to stop her. This book is written to encourage people to consider the damage done by everyday sexism but in a funny and light-hearted way.”

In her role as an academic, Dr O’Shea Meddour taught feminist theory and literature, and started writing children’s books after having children, when couldn’t find the sort of books she wanted to read with them, particularly her daughter.

Dr O’Shea Meddour said: “The message of so many children’s books with a female protagonist seemed to be ‘wait for your prince’ but I wanted my little girl to know that she didn’t have to wait for anyone. So I started to write the stories I wanted her to read. How the Library (Not the Prince) Saved Rapunzel’ was my first and became a World Book Day choice, read by Emma Watson on CBeebies.

“I love addressing potentially challenging topics in my children’s books as they provide such a wonderful to space for parents, educators and carers to open up conversations about important topics, and with children from such a very young age. Reading with a trusted adult is the perfect way to share and discuss thoughts, hopes, worries and dreams about the future. It’s also a good way of countering every day sexism while keeping your sense of humour! At which point, I should probably thank the man at the garage for being my muse and wish him a Happy International Women’s Day!”