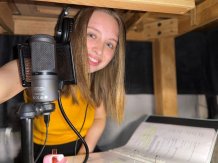 A third year English student at the University of Exeter has featured in a BBC radio play.

Kirsten Udall played Susannah, William Shakespeare’s daughter, in the BBC Radio 3 drama The Rival. Written by Jude Cook, the play imagines the life of Shakespeare, using his sonnets as inspiration. The play aired on BBC Radio 3 and was featured as the Radio Times’ top radio pick for the day, with actor Eliott Barnes-Worrell starred as Shakespeare.

“This was my first outing into this kind of work,” said Kirsten, “So I was a little nervous beforehand about meeting and working with these experienced actors, but they were so welcoming, lovely and supportive of the project. Also, as soon as we started, we were all on equal terms which was really refreshing and you learn a lot from each other”.

Kirsten recorded her part during a single day in April. Due to national COVID-19 restrictions, all the recording took place remotely and she had to be imaginative about the sound-proofing.

“You all have to make up your own recording booths and mine was set up under my kitchen table with duvets over the sides, trying to muffle the sound out however we could. But then it was all over a similar software to zoom. You work with the other actor so it’s really organic in that way. There was one take where I’m running and it’s all breath, so you have to lose all your inhibitions”.

On playing Shakespeare’s daughter, Kirsten said: “Susannah is only supposed to be 11 or 12 at the time the play is set. But she’s not meek or mild, she’s very headstrong and that was something I thought would be really fun to play”.

The play uses Shakespeare’s sonnets as its main source material.

“It’s a fascinating take on things that historians have been arguing about for centuries now, things like Shakespeare’s sexuality and the circumstances of how his sonnets came to be,” added Kirsten.  “The Rival’s curiosity I found really interesting and hopefully a lot of other people will as well”.

You can listen to ‘The Rival’ on BBC sounds here.