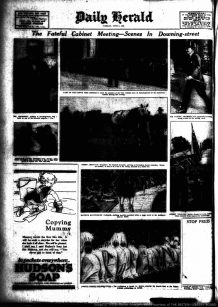 Winston Churchill refused to apologise after he wrongly accused a newspaper of printing a fake picture of him, new research shows.

A new book showing how the famous Prime Minister exploited the media – and sometimes tried to get them to avoid critical coverage of him – details how he mistakenly thought the image was manipulated to paint him in a bad light.

The picture, published on the back page of the Daily Herald on 4 June 1929, showed Churchill outside 11 Downing Street, the Chancellor of the Exchequer’s residence. He was photographed carrying a book with the one-word title—‘WAR’—clearly visible. The caption suggested that war was “one of his favourite subjects”.

Churchill argued the photograph wasn’t genuine after a member of the public wrote to him comparing the Herald’s shot with a similar one that appeared in another paper where the word ‘WAR’ could not be seen. He asked Edward Marsh, his friend and private secretary, to write to the Herald’s editor, William Mellor, to express his outrage.

The letter said: “Obviously your photographer, or someone at your office, has deliberately faked or forged a copy of the photograph which was published in the “Daily Herald” for the purpose of sustaining a prejudicial caption”.

The book, Winston Churchill, a Life in the News, by Professor Richard Toye from the University of Exeter, shows bad blood had existed between Churchill and the Herald, left-wing newspaper, for the previous decade. When he was Secretary of State for War and Air, the paper had passionately opposed his support for the ‘White’ anti-Bolshevik forces in the Russian civil war. He, in turn, had issued orders that the War Office was no longer to facilitate Herald journalists because the Herald contained “propaganda of an essentially disloyal and subversive character”.

The Herald, absolutely sure the picture was genuine, even appealed to the right-wing Morning Post, which had employed Churchill himself as a young correspondent three decades earlier.

The Post’s experts examined the materials submitted to them and were “unanimously agreed that they can find nothing in the negative to suggest that it is not perfectly genuine”. The contact print from the negative and the enlargement from which the reproduction in the paper was made were also genuine and bore no trace of having been touched. Whereas in the printed version the word ‘WAR’ had been made blacker and more distinct, this was “merely an emphasis of definition such as is employed in every process room to make clear some point of special interest in a picture”.

The book Churchill was carrying was a recently published anti-war novel by Ludwig Renn and it seemed he had casually picked a copy up, carried it with him in the street, and then forgotten having done so.

Other papers’ photographers had taken their pictures from slightly different angles, and although the lettering was not quite as legible as in the Herald, the title, on close inspection, was visible enough.

Churchill declined to say sorry for his wrongful allegation, instead offering bland thanks to the Herald for its “assurance” that the photograph had not been tampered with. The editor demanded a complete and categorical withdrawal and apology, but Churchill took the view that the Herald’s “abusive campaign” against him absolved him “from the need of making any further amends”. The Herald had the last word, with its cartoonist’s suggestion of the book Churchill should read next: The Manners of Gentlemen.

Professor Toye said: “The Morning Post was right to describe this episode as a storm in a teacup. There were no lasting consequences and the story appears to have been forgotten down to the present day. However Churchill’s cry of ‘fake or forgery’, and his refusal to back down when proven wrong, is reminiscent of those politicians who today label criticism of them as “fake news”.

“Of course throughout his career Churchill did, periodically, praise the press as a healthy factor in politics because it drew attention to governments’ shortcomings. But his attack on the Herald was no one-off lapse.”

Professor Toye’s book shows how, as an instinctive showman, and one of the first politicians to be a true global celebrity, Churchill exploited the media, including radio and film, to spectacular effect, and sometimes wanted to silence dissent, not always on legitimate national security grounds, but because he was nettled by criticism.

Professor Toye emphasised that criticisms of Churchill’s behaviour, and possible comparisons with the actions of figures such as Donald Trump, should not be overstated: “Churchill may have refused to apologise to the Daily Herald, but he did not actually continue to assert, in the face of the evidence, that he had been right all along.”

The relationship between Churchill and the Daily Herald later improved. In 1936 the paper published articles showing Germany was importing huge quantities of materials essential to weapons production. Churchill felt this proved his suspicions about the Nazi regime, referred to these revelations in the Commons, and commended the paper for having never tried to shield its readers from unpleasant facts. The newspaper then fed him information on Germany, including commodity market dealings and statistical reports. Professor Toye said: “Churchill’s legendary capacity for magnanimity was generally not much in evidence when it came to the press, but we can see it on this occasion.”