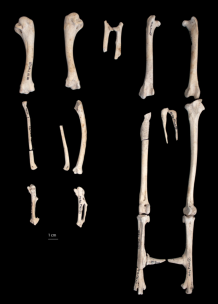 Iron Age cockerel from Houghton Down, Hampshire, radiocarbon dated to the 4th-3rd century BC. Analysis of the spurs suggests the bird lived to at least two years old. Credit Julia Best

Ancient chickens lived significantly longer than their modern equivalents because they were seen as sacred – not food – archaeologists have found.

Experts have developed the first reliable method of finding the age of fowl who lived thousands of years ago. Their research shows they lived to advanced ages, and were kept for ritual sacrifice or cockfighting rather than meat or egg production.

Chickens today live for a few weeks (in the UK poultry birds live for between 33 and 81 days), but during the Iron Age, Roman and Saxon period they lived up to the age of two, three or even four years old.

Calculating the age of bird remains is hard because techniques used for mammals, such as bone fusion and tooth wear, are not available. Researchers have devised a new method based on size of the tarsometatarsal spur which develops on the leg of adult cockerels.

The new method was tested on modern birds of known-age and then applied to ancient specimens. This has allowed the experts to reconstruct the demographics of domestic fowl from Iron Age to Early Modern sites in Britain to reveal changes in relationships between humans and fowl.

Of the 123 Iron Age, Roman and Saxon bones analysed, over 50 per cent were of chickens aged over two years, and around 25 per cent over three years.

Dr Sean Doherty, from the University of Exeter, who led the study, said: ”Domestic fowl were introduced in the Iron Age and likely held a special status, where they were viewed as sacred rather than as food. Most chicken bones show no evidence for butchery, and were buried as complete skeletons rather than with other food waste”

”The study confirms the special status of these rare and highly prized birds, showing that from the Iron Age to Saxon period they were surviving well past sexual maturity. Most lived beyond a year, with many reaching the age of two, three and four years old. The age of which cockerels then started to die at becomes younger after this period.”

Experts carried out analysis on modern leg bones from domestic fowl and red jungle fowl of known age and sex from multiple collections. This revealed that the bony spur only develops in older birds.

Of the 69 cockerels aged below 1 year, only 14 (20 per cent) had developed a spur. The only age in which all cockerels had a spur was those aged over 6 years. Consequently, there is the potential for archaeologists to misidentify young cockerels without a spur as hens.

Once fully developed, the spur increases in size and its length in relation to the length of the leg can be used to estimate age.

The researchers also took measurements from 1,368 domestic fowl leg bones from British sites dating from the Iron Age to modern period to reconstruct the age when they had died and their sex. This suggested during the Iron Age and Roman period there were significantly more cockerels than hens, likely due to the popularity of cockfighting in this period.

This study, Estimating the age of domestic fowl (Gallus gallus domesticus L. 1758) cockerels through spur development, is published in the International Journal of Osteoarchaeology. https://doi.org/10.1002/oa.2988.