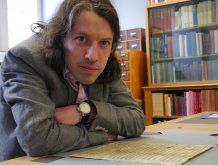 Rare Anglo Saxon documents which show a Bishop hoped unconvincing forgeries might protect his property during the instability of the Norman Conquests can be seen by the public.

The founders of Exeter Cathedral produced the charters when they realised they had no evidence nearby lands belonged to them, but they bear no resemblance to the real thing.

The documents, unique because most forgeries from the period haven’t survived, were produced by the office of the first Bishop of Exeter in the 1060s, shortly before the Norman Conquest. They claimed King Æthelstan of England, who reigned from 924 to 939, had granted the church multiple pieces of land along the Exe valley.

Researchers from the University of Exeter have organised an exhibition of the documents at Exeter Cathedral. They believe canons acting on behalf of the Bishop may have panicked when they found documents missing, and making forgeries was the easiest way to solve the problem. By the 11th century England had become more literate, and bureaucratic, so documentation had become more important. There is no record if Æthelstan did actually give the lands cited in the charters to the church.

Dr Jennie England, a member of the research team who organised the exhibition, said: “These fakes can show us more truth about the period than genuine documents. They tell us little about the reign of Æthelstan, but they do provide a fascinating snapshot into the concerns of the eleventh-century cathedral community and its leader, Bishop Leofric.

“I believe the founders of Exeter Cathedral were proud of their history, and trying to produce solid foundations for the future.”

Dr Levi Roach, who is leading a project on medieval forged documents across Europe, said: “This was a time of upheaval, Exeter Cathedral had been created from two other Bishoprics in Devon and Cornwall. Obviously the new cathedral inherited documents related to ownership of land and property, but perhaps there were gaps, and it was easier to create forgeries than apply for new charters. The canons may not have wanted to create questions over the legitimacy of the property.

“Whereas Anglo Saxon kings may have let Bishops get away without not having the right documentation sometimes, the first Bishop of Exeter may have felt this was no longer the case during this time of extreme social change in society and politics. He may have felt it was wise to protect his rights.”

The charters are produced in portrait form, not landscape which was the norm during King Æthelstan’s reign. They are also physically smaller and the style of the handwriting didn’t become the norm until the 960s. Whoever forged the documents made no attempt to make them look genuine, probably because they had never seen a real charter from the period. They would have gambled that nobody would ask to see it, or those who did would not have seen a genuine charter from the time either.

King Æthelstan did visit the South West and Exeter, and whoever produced the charters may have chosen to cite his reign because he was seen as a foundational figure in the city. Cathedral staff confirmed the documents were forgeries in the 19th century.

Including the Æthelstan forgeries, Exeter Cathedral’s Library and Archives holds sixteen pre-Conquest charters – an exceptionally large number for a regional archive. Genuine charters are also on display at the exhibition, which will run until 31 May. There will be public tours on Saturday 25, Monday 27 and Tuesday 28 May, where there will a unique opportunity to see some of the Archive’s Anglo-Saxon charters up close.