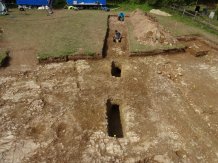 Roman road and possible mine discovered during Cornish archaeological excavations

Archaeologists have discovered a Roman road and possible ancient mine during excavations in Cornwall as they work to discover more about the history of the county.

Experts will carry out further analysis of the previously-unknown series of deep pits, which are connected by arched tunnels. It is likely to be yet another mine worked many hundreds of years ago when this area of South East Cornwall and West Devon was famed for having some of the richest mineral deposits in the world.

Archaeologists from the University of Exeter and local volunteers have been digging for the past month near to the site of a previously-found Roman fort at Calstock, in the Tamar Valley. This year’s excavation has focused on an area outside the fort’s west gate, which was at the front of the fort, originally facing hostile territory.

As well as the possible mine they have discovered a Roman road, which would have served regular military traffic in and out of the fort. The excavation has revealed a rare glimpse of timber-built Roman military buildings constructed outside of the fort, as well as a series of rubbish and cess pits, indicating that the Roman army was also active outside of the fort’s defences.

The archaeologists have also found the remains of a medieval timber longhouse, suggesting the site was later occupied between the 8th and early 13th century but was then deserted. This explains why the parish church, originally built to be at the heart of a hamlet or village, is now isolated.

The team, led by Dr Chris Smart of the University of Exeter’s Department of Archaeology, have been joined by over 20 local volunteers during each day of the dig, including refugees and asylum-seekers from Plymouth. More than 100 children from four local primary schools have attended workshops on site.

Dr Smart said: “It has been wonderful working with so many of the local community to better understand the area’s Roman and medieval past. We are very pleased to have found such a well-made Roman road and the possible mine workings have proved a real unexpected bonus. Whilst we still do not know their age, it is possible that they are from the medieval period”.

No objects were found in the possible mine, making it hard to date when it was used. One of the deep pits cuts into the Roman road, so it is likely that they are later than the Roman military occupation of the area.

The work, which also includes two more excavations in 2020 and 2021, is funded by the National Lottery Heritage Fund as part of the wider Understanding Landscapes project.

Calstock Roman fort was discovered in 2007 as part of an earlier University of Exeter project to investigate medieval silver mining in Bere Ferrers, on the opposite side of the River Tamar, in Devon. Excavations between 2008 and 2011 provided evidence that it was constructed in around AD 50, and remained in use with a garrison of about 500 men for 30 years. At some point in the life of the fort a second defensive circuit was added to enclose and protect buildings outside of the fort, and this may point to a period of heightened threat.

The excavation has now finished but visitors to the site can find out more by reading an information board outside the parish cemetery, or at the project’s website