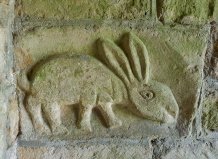 11th or 12th century carving from Elmley Castle in Worcestershire

The public can play detective and help experts solve the mystery of the origins of the Easter bunny as part of a different kind of Easter hunt this year.

People enjoying historic places in Britain can help academics collect evidence of the earliest representations of rabbits and hares in the UK. These images – which people will be able to send to the experts via their smartphone or tablet - will help trace the history of Easter celebrations, and the introduction of rabbits and hares to the country.

Neither the European rabbit nor the brown hare are native to Britain. Little is known about the timing and circumstances of their introduction or how they how they came to be associated with the Christian festival of Easter. These are issues that researchers from the University of Exeter, University of Oxford and University of Leicester are trying to address. But they need the public’s help.

Professor Naomi Sykes, an archaeologist from the University of Exeter who is leading the research, said: “The origins of the Easter Bunny are still a real mystery. We have been working to find as much evidence as possible but we want the public to help us find lots more. We want them to go on a real Easter hunt so we can try to piece together the history of rabbits, hares and Easter itself. So we hope they look at church carvings, museum collections and pub signs and tell us what they’ve found.”

The researchers think the linkage of Easter with bunnies may have started because hares were depicted in Byzantine baptismal imagery and, in early Christianity, Easter was the usual time when baptisms took place.

The team believes that ancient animal iconography might provide the necessary clues to track the spread of rabbits and hares across Europe, understand when they were introduced to Britain and even discover the origins of the Easter Bunny.

A new app – Ancient Animals - created by the research team makes it easy for people to share this kind of evidence. People can submit photographs of ancient animal representations such as 2-D paintings, 3-D sculptures, physical remains, objects or artefacts. The app will allow users to instantly upload images from their phones, and input information about the location and type of evidence they’ve found.

Besides rabbits and hares, the app will allow people to submit records for a variety of other animals - be they native, introduced or extinct - each of which has its own fascinating story that can be told through their ancient representations.

The Ancient Animals app, which can be downloaded for free for smartphones and tablets, was developed by Natural Apptitude (www.natural-apptitude.co.uk), specialists in the development of apps and websites for citizen science projects. This work is supported by the Arts and Humanities Research Council.

More information about the project can be found on the website