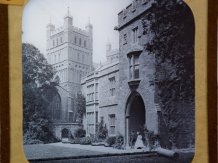 Magic lantern slides have been preserved for future generations

Thousands of fragile and irreplaceable images of Devon have been preserved for future generations to see thanks to University of Exeter experts.

The shots – including famous locations in Exeter and Devon as they looked generations ago - are on view for the first time in a century after magic lantern slides were digitised.

The slides – hand-painted images on slides and photographic transparencies - were used in projectors, either in private homes or at public events in churches, town halls and schools to show images that would delight and enlighten audiences. They feature the work of amateur photographers hoping to show their pictures of local scenes to others. Other slides feature artwork, with some used during temperance or religious “shows” to encourage people to change their lifestyles.

The images are held in museums around the country but are too fragile to be on display. Digitising them preserves the images, and also allows them to be used again in exhibitions and as a historical resource.

Academics have digitised around 30,000 slides so far, including almost 5,000 from the Royal Albert Memorial Museum & Art Gallery, RAMM, in Exeter, 18,000 from the Manchester Museum, 3,400 from Chethams Library in Manchester and 2,000 from Ilfracombe Museum. Thousands of slides from the Royal Geographical Society in London, Royal Institution and private collections have also been digitised. They are now available for anyone to see on the Lucerna Magic Lantern Web Resource open access database.

The work is part of a pan-European research project across five different countries. The slides were mostly made in the late 19th and early 20th centuries, and encompass almost every subject and theme. Most of the slides are the ‘standard’ size of 3.25 inches (83mm) square.

The magic lantern, an antique form of slide projector, originated in the 17th century and were used for more than 350 years in every part of the world. Early versions used candles and oil lamps as the light source, and later became powered by elaborate gas-fired ‘limelight’ burners, and then electricity. Some had mechanical devices to give the illusion of movement to the otherwise static images. Its heyday was around the end of the 19th century, when a worldwide network of businesses made, sold and hired slides. In the middle of the 20th century it gradually evolved into first the common ‘slide projector’ seen in many homes and institutions and then the digital ‘data projector’ found everywhere today.

Professor Joe Kember, from the University of Exeter is the UK lead for the project, a partnership between the Universities of Antwerp, Exeter, Girona, Salamanca and Utrecht. It is funded by the Joint Programming Initiative on Cultural Heritage, a European Commission conservation project to make historical materials digitally accessible.

Dr Kember said: “Many museums have lantern slides, some have thousands, given to them in the late 19th century and early 20th century when lanterns fell out of use. Until now it has been very difficult to know what to do with them, as they are often too fragile and difficult to use. The slides are a fabulous image archive and it is essential they are kept available for future generations. Digitisation means we can make these images available freely to the public.”

A small selection of magic lanterns and slides is on display at RAMM from 12 to 14 January, featuring items from RAMM’s collection and the Bill Douglas Cinema Museum. Other slides are being shown for the first time in the RAMM exhibition ‘Dartmoor: a Wild and Wondrous Region’ until 1 April 2018.

Also as part of the project lanternists Jeremy and Carolyn Brooker, accompanied by live music from multi-instrumentalists Richard Navarro, Nicholas Thurston and Miriam Gould, will demonstrate how magic lanterns thrilled audiences. The show will be held in Exeter’s Barnfield Theatre, constructed originally as a lecture hall to accommodate lantern projection. The show includes music and a rare demonstration of projection onto a ‘living screen’ using hand-painted slides once owned by the parents of the film actor Peter Sellers.