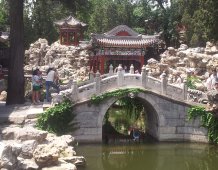 Research by a University of Exeter expert has been inscribed on bronze plaques seen by millions of visitors to one of China’s most important parks.

Dr Yue Zhuang, a senior lecturer in Chinese, has analysed the architecture at Behai Park, Beijing. Her work is now displayed at various scenic spots in the garden.

Behai Park is one of the largest of the Qing imperial gardens, and contains various historically important structures, palaces and temples.

Dr Zhuang’s research is the first to show the influence of Confucian ideology in the design of the garden, and her findings will help the seven million annual visitors better understand its cultural legacy.

Dr Zhuang said: “The Qing dynasty based it’s governance in Confucian morality – a philosophy which promotes benevolence, justice and the pursuit of knowledge amongst other virtues.

“Conventional understandings considered the garden as an indulgence of the emperor’s sensual pleasures, or a mere display of imperial status. My research shows that the design of the Jin xin zhai garden was underpinned by the Qianlong emperor’s idea of using the garden as a site of moral-aesthetic cultivation.”

Like many Chinese emperors, the Qianlong emperor, who came to power in 1735, took the country’s cultural identity very seriously, and built various palaces and gardens during his reign. He favoured the Jin xin zhai garden in Beihai for its tranquil ambience.

Previous interpretations of the garden’s architecture have suggested it was influenced by escapist Daoist ideology, which focused on escaping unpleasant realities through religion and humility.

The plaques were installed as part of a three-year restoration period, and have been on show since the reopening in January 2017.