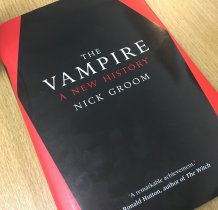 The Vampire: A New History by Professor Nick Groom

Are Frankenstein and Dracula Blood Brothers?

In Hollywood films, Frankenstein’s monster (or ‘Being’) usually appears as a shambling zombie. Count Dracula is sleek and sophisticated. Though they have often appeared on double bills, they are very different monsters – or are they?

In a new book, Exeter University’s Professor Nick Groom (the ‘Prof. of Goth’) argues that until now both academics and readers have missed the vampiric qualities of Mary Shelley’s iconic figure.

Vampires were not invented by fiction writers. Outbreaks of vampirism were really recorded by doctors and magistrates in Eastern Europe in the 1720s and 1730s. ‘It’s impossible that Mary Shelley wouldn’t have known about these’, says Professor Groom.

The early cases describe vampires as rising from the dead and strangling close family members, before sucking their blood.

They inspired extensive medical debate, which also drew in theologians and philosophers.

While frightening numbers of witnesses testified to the existence of vampires, and doctors puzzled over the forensic evidence for them, Mary Shelley created a monster closely based on the Eastern European blood-suckers.

Like vampires, the Being attacks his closest kin: the family of his creator Victor Frankenstein. Like vampires, the Being strangles them. And like vampires, the Being leaves at least one victim drained of blood. At the end of the novel, the Being cremates himself on a pyre. Although this was a surefire way of disposing of a vampire throughout the eighteenth century, cremation was not properly legalized in Britain until 1885. Mary Shelley also introduced state-of-the-art science and medicine into the novel, inspired by Dr Polidori’s researches and Percy Shelley’s term spent as an anatomy student, as well as by the earliest medical research into vampirism.

Prof. Groom points out that, ‘Despite the first English vampire tale and Mary Shelley’s Frankenstein being conceived and begun during the dark summer of 1816 in a villa on the banks of Lake Geneva, the similarities between the two stories have been completely overlooked. Although he is not explicitly a vampire, the Being that Victor Frankenstein creates is steeped in the psychotic aura of East European vampirism’.

The Vampire: A New History was published on 16 October by Yale University Press. It has been described by Prof. Ronald Hutton of Bristol University as ‘a remarkable achievement.’