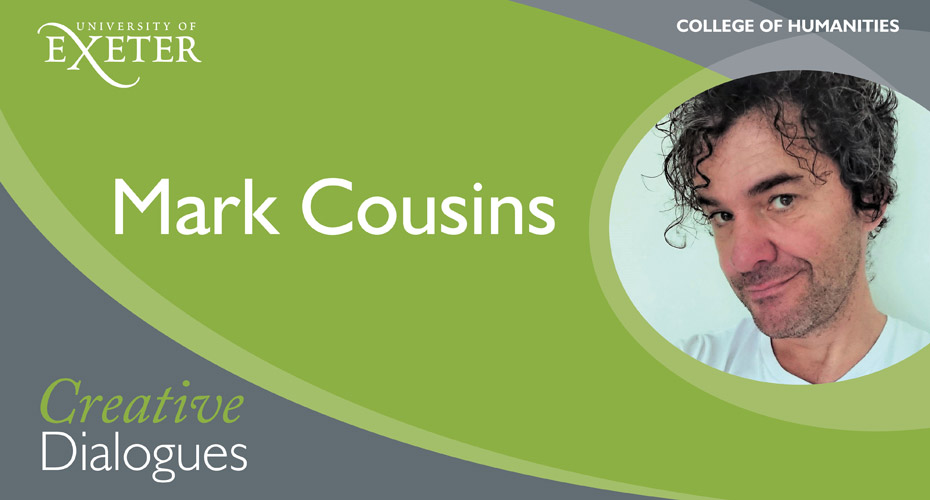 This event in the Creative Dialogues series took place on 24th January 2019. It featured film director and writer Mark Cousins, in conversation with Don Boyd Hon DLitt, film director, producer, screenwriter and novelist, and Honorary Professor in Film Practice at the University of Exeter.

Mark Cousins is an Irish-Scottish director and writer. His films – including The First Movie, The Story of Film: An Odyssey, What is This Film Called Love?, Life May Be, A Story of Children and Film, Atomic, Stockholm My Love and The Eyes of Orson Welles – have premiered in Cannes, Berlin, Sundance and Venice film festivals and have won the Prix Italia, a Peabody, the Stanley Kubrick Award and many other prizes. He has worked in Iraq, Sarajevo during the siege, Iran, across Asia and in America in Europe. He is Honorary Professor of film at the University of Glasgow, and had Honorary Doctorates from the Universities of Edinburgh and Stirling.

His books include Imagining Reality: The Faber Book of Documentary, The Story of Film and the The Story of Looking. They have been published around the world. He writes for Sight & Sound and Filmkrant and has collaborated with Tilda Swinton on innovative film events. He is the Chair of the Belfast Film Festival, a Patron of the Edinburgh International Film Festival and a board member of Michael Moore’s Traverse City Film Festival. His new project is a 15 hour documentary which rethinks cinema. It is narrated by Jane Fonda and Tilda Swinton.  He has walked across Los Angeles, Moscow, Beijing, London, Paris, Berlin, Dakar and Mexico City.  He drove from Edinburgh to Mumbai, and loves night swimming.