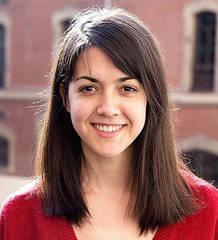 Following, she gained a MA in Audiovisual Translation - subtitling and dubbing - (ISTRAD, 2010) and in 2011 she graduated in a MA in Linguistics Applied to the Teaching of Spanish as a Second Language. Her final thesis was a study called La Enseñanza de español como lengua extranjera a estudiantes con deficiencia visual o ceguera: propuesta didáctica de adaptación de actividades para el DELE A1 based on a methodological adaption of the process of teaching Spanish to students with visual disabilities or blindness, focused on the preparation of the DELE Official Spanish Language Certificate for beginners by using a non-visual input to introduce language content.

Later, in 2015 she gained another Master in Research in Translation and Interpreting Studies (Jaume I University, Spain) as this is another domain of her interest. Her master thesis was a descrptive study of the language of audiodescription in Spanish.

After having worked seven years at the Centro de Estudios Hispánicos at Nebrija University in Madrid, she is currently teaching at Exeter University different modules on Spanish Language. She is an accredited examiner of the DELE Certificates in Spanish of the Instituto Cervantes. She has also worked as a freelance translator and conference interpreter from English and French into Spanish.

To see my research projects,  https://www.researchgate.net/profile/Ana_Villoslada?ev=hdr_xprf