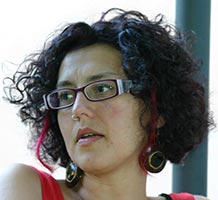 Dr Maestri was the recipient of a grant from the British Federation of Women Graduates (in 2006) and has co-organised events, among which the post-graduate symposium Negotiating Modernity (University of Bath, 2010), with the Roberts funding from the Research Council U.K. In 2008 she was the recipient of a ‘Student Employee of the Year Award’ at Bath and in 2011 she achieved joint second place in the R.H. Gapper Postgraduate Essay Prize competition (Society for French Studies). She is currently an Associate Member of the Centre for the Study of Contemporary Women’s Writing (University of London).

Dr Maestri has published in the field of Translation and Gender Studies and is in the process of publishing her monograph Translating the female self across cultures with John Benjamins  publishing house.