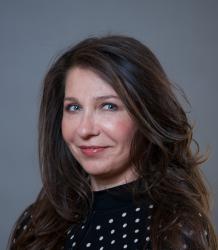 Teaching has been a passion of mine for many years.

I am an Associate Lecturer in Russian. I first graduated in Economics at the Kiev National Economic University and worked part-time for the European Bank for Reconstruction and Development in Kiev. In 2010 I was awarded an MA with distinction in Translation at the University of Exeter.

Throughout my 20- year teaching career, I have continued to teach Contemporary Russian Written, Oral and Translation modules at all levels. In 2007 I developed an evening language programme for adults, which I have taught ever since in the FLC at the University of Exeter. Over the last two years I have created and run a ‘Languages in Action’ Russian course for the MoD. I became a Fellow of the Higher Education Academy in 2012, after completing a Postgraduate Certificate in Professional Practice at the University of Exeter.

With a strong background in Russian and Ukrainian translation I am an experienced teacher in both languages, at all levels, who is passionate about sharing and learning ideas and cultures. I am a native Russian speaker and have been a resident in the UK since 1998. I therefore grew up in a Russian speaking country but have the experience of living and working in both an English speaking and a Russian speaking culture. I have also had the opportunity to utilise my Russian language across diverse professional contexts – from translating complex material to singing Russian songs in class with my students.