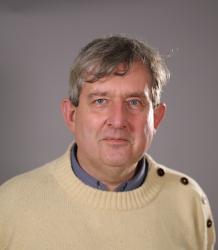 Derek Flitter was an undergraduate and postgraduate student of The Queen's College, Oxford. He was Laming Junior Fellow at The Queen's College and then British Academy Post-Doctoral Fellow in Spanish at Oxford between 1986 and 1990. After sixteen years working at the University of Birmingham, he came to Exeter as Professor in Spanish in 2007.

A period of study leave in 2015 saw him begin work on a new monograph dedicated to the place of Gustavo Adolfo Bécquer in the Spanish literary canon and in the history of Spanish aesthetics.

My first book dealt with the reception of Romantic aesthetics in Spain in the first half of the nineteenth century. It was described in a major review (Bulletin of Hispanic Studies, January 1995) as ‘an impressively researched volume, written with conviction and grace’, and as ‘the authoritative text on the question for years to come’. My 2006 monograph examined the ideological entailments of narratives of history made by Spanish Romantic historians and their shaping of prevalent Romantic perceptions of the past. I have published widely on various aspects of Spanish Romantic literature, especially the drama, and my current focus is reflected in the monograph, in preparation, on eschatological elements in Spanish Romantic theatre. I am currently completing an article on the aesthetic of the Sublime in the creation of landscape in Spanish Romantic poetry. I am a contributor to the Blackwell Companion to European Romanticism, the Cambridge History of Spanish Literature, and to the OUP Handbook of European Romanticism.

My most recent book is a study of ways of conceiving and interpreting history in early nineteenth-century Spain, when the ‘philosophy of history’ was first gaining intellectual currency in that country. Several of my other published essays have dealt with specific aspects of that same subject and its ideological conditioning. I am particularly interested also in the genealogy of important thought patterns and motifs within nineteenth- and early twentieth-century Spanish literature and ideas, especially the connections between Romanticism and the artistic culture of the Decadence, evidenced in my translation, with critical introduction, of Valle-Inclán’s Autumn Sonata.

I have published several articles on the Nobel Prize-winning poet Juan Ramón Jiménez, and have a long-standing interest in poetic formulations of Platonic idealism in Spain. I am particularly interested in poetic expressions of spirituality and mysticism, and in their interdependence with forms of organised religion. I am currently co-authoring a collection of essays on the Spanish Romantic poet José de Espronceda as part of a collaborative partnership with Professor Diego Martínez Torrón (University of Córdoba).

The Recovery of Historical Memory in Spain

My long-standing teaching interest in post-Civil War Spanish narrative and my work in aspects of modern Spanish historiography have led me to explore representations of historical memory within contemporary Spanish literature. This has led to the organisation of an international conference at Exeter in November 2009 in conjunction with the Fundación Francisco Largo Caballero in Madrid and to the co-editing, with my colleague Professor Sally Faulkner, of a special thematic issue of the Journal of Iberian and Latin-American Research, published by Routledge in 2011.

My research in this area has focused upon the major poets of the Galician cultural revival or Rexurdimento and upon the Galician cultural historian Ramón Otero Pedrayo. My published work has concentrated especially upon formulations of Galician nationhood and their provenance within the broader history of ideas, most recently in an article on the German Romantic entailments of Rosalía de Castro's poetry, which appeared in online publication under the auspices of the Consello da Cultura Galega.

Professor Flitter teaches widely in modern Spanish literature across the undergraduate curriculum, and contributes to the literary translation component of Spanish language modules.