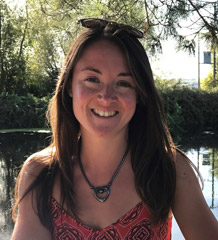 I completed my studies at the University of Sheffield, where I obtained a BA in French and Music, a Masters Degree (Research Track) in French, and a PhD in French Studies, specialising in Medieval French Literature.

My PhD thesis focused on analysing the anonymous Old French romance Guillaume de Palerne as a self-reflexive text which highlights the processes of production and reception in medieval literature, including exploring rewriting and the role of the audience in recognising intertextual references. During my doctoral studies, I also developed a secondary research interest in French rap, particularly the work of Abd Al Malik, with a focus on examining artists' identity, as shaped by audience reception of their work.

After my PhD, I spent two years on the government-funded post-doctoral teaching scheme ‘Researchers in Schools’, completing my QTS and NQT years in a secondary school in Devon. I taught French and German from Y7 to Y13, before taking up the position of Lecturer in French at Manchester Metropolitan University in 2017, where I taught French language and culture modules to students across a range of degree programmes. I have since worked in the Outreach and Widening Participation sector, running the data collection and evaluation of a multi-partnered HE outreach project in the South West, and joined the University of Exeter in January 2020 as Lecturer in French. I teach French language and culture, specialising in medieval literature and French rap and hip-hop culture.

My primary research area is medieval French verse literature (especially 12th-13th centuries), focusing in particular on intertextuality and medieval approaches to composition through rewriting. This research encompasses approaches to understanding the audience of medieval romance, and engages with theories of reader-response and reception. I am thus also interested in exploring how medieval literature aligns with and sheds light on ‘modern’ literary theories.
My secondary research interest is in modern French rap, particularly the ‘slammeur’ Abd Al Malik, with a focus on exploring the notion of identity amongst contemporary hip-hop artists. This includes an overarching study of the way in which hip-hop artists discuss their identity within and relationship with France and French society, including rappers such as Youssoupha, Kery James, and Gaël Faye alongside discussion of Abd Al Malik. My research in this area also links to my primary research on rewriting, intertextuality, and the role and impact of the audience on artistic works, as I explore Malik’s developing artistic identity and his rewriting of literary texts, in particular Camus.

Having worked on a range of Outreach and Widening Participation projects at different institutions over the past 8 years, including the Routes into Languages and Researchers in Schools projects, I am delighted to now be part of the British Academy-funded project 'Modern Languages Outreach and Engagement'. This project connects eight early career researchers and teachers, national providers and policy bodies to discuss current provisions for teaching Modern Languages and to share best practice for research-based engagement. For further information, please see http://www.mloe.org

I am a Fellow of the Higher Education Academy, and am a fully qualified teacher of MFL in UK Secondary Schools.