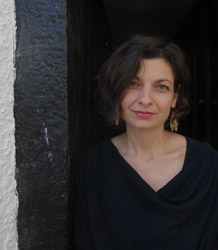 Professor of History and Medical Humanities

I am a historian of medicine, science and technology, with expertise in the history of epidemics, the politics of health, and Cold War history. My work focuses on questions of global health and biomedical research in the Cold War era, using the locality of Eastern Europe as a starting point. My research is informed by gender history, history of childhood and disability history, and is in conversation with medical anthropology, sociological approaches and political science. I received my PhD in History from Rutgers University and before joining Exeter I was a research fellow at the Max Planck Institute for the History of Science, Berlin, and a postdoctoral fellow at Birkbeck, University of London.

My interest spans from the politics of epidemic management to public health systems and access to therapeutics. My book, Polio Across the Iron Curtain: Hungary's Cold War with an Epidemic was published open access in 2018 with Cambridge University Press. I have written on the global infrastructure of diphtheria antitoxin, the politics of vaccination in Eastern Europe, hospital care of disabled children in communist cotexts and about shifting epidemic narratives in historical analysis.

With colleagues from the University of Oxford, the University of Edinburgh and Johns Hopkins University I have been working on an engaged research project titled After the End of Disease. Placing epidemic narratives in focus, this project is an interdisciplinary collaboration to interrogate epidemic endings, think past the conventional narrative and neat epidemic bell-curves to identify, collect and disseminate different understandings of disease impacts.

Currently I am embarking on two, interconnected research projects exploring alternative approaches to the history of global health. Socialist Medicine: An Alternative Global Health History, funded by an ERC Starting Grant investigates the role of the socialist world in global health structures and networks, while the collaborative project funded by the Wellcome Trust, Connecting Three Worlds, together with Sarah Marks (Birkbeck) and Edna Suarez-Diaz (UNAM, Mexico) explores socialist networks in public health, technical assistance programs and mental health in the post-WWII era.

My recent book, Polio Across the Iron Curtain: Hungary's Cold War with an Epidemic uses the series of polio epidemics in communist Hungary to investigate a global public health emergency in the midst of an international political crisis. In this book, I argue that due to the particularities of polio, unique spaces of cooperation opened between antagonistic sides while Cold War concepts simultaneously influenced policies and practices of disease prevention and treatment. Based on extensive archival material, medical and popular literature, hospital documents, memoirs and oral history interviews the book analyses the history of polio in Hungary at multiple registers. On an international level, it asks how Cold War divisions can be re-evaluated when viewed through the lens of a disease that disregarded borders and ideologies. On a national level, the book investigates how post-war societies and nascent political systems dealt with an epidemic that worked against their modernist projects. On an individual level, it raises questions about definitions of treatment, authority of care and investigates the boundary between professional and lay knowledge.

As a further step, I have been examining the roles of international professional networks in shaping the agendas of international organizations such as the WHO. Through the story of experiments and campaigns with the live poliovirus vaccine spanning four continents, this research explores the roots of the Global Polio Eradication Initiative. Analyzing vaccine trials and vaccination campaigns from the Brazil through Singapore to Czechoslovakia and Poland, I investigate Cold War politics, post-colonial power struggles and commercial interests in the rivalry of competing scientists, and the rise of the Sabin vaccine as the ultimate technology of eradication.

My research on polio has brought me to think about the temporality and geography of disease more broadly. Polio as a disease seems to challenge conventional frameworks within which we think about when epidemics are happening and where public health policies, medical innovation and interventions take place. My current work, After the End of Disease critically addresses these categories and dislocates geographies and narratives of disease and health. I am exploring ways to think about international and global public health outside of the framework of Geneva and US-based NGOs; and to question straightforward scripts of beginnings, crises and endings when it comes to disease.

My new research avenue, Socialist Medicine pioneers a new history of global health that, for the first time, incorporates the socialist world - a constellation of countries in a fluctuating political, economic and military nexus distinct from the capitalist West. It identifies the particular health cultures produced by socialism (in all its variety) and explores the impact of socialist internationalism in co-producing global health in the 20th century. The proposed project pioneers a new history that will not only transform our knowledge of historical processes, but will further our understanding of ideas, practices and processes that current global health structures have been built on. This research is funded by The Wellcome Trust and the European Research Council.

I am member of The Reluctant Internationalists research group, led by Jessica Reinisch at Birkbeck, University of London. This Wellcome Trust-funded project studies the history of public health and international organizations, the movement of experts and knowledge in twentieth century Europe.

I have worked on a collaborative project on access to global pharmaceuticals in the post-vaccination era with Jeremy Greene at Johns Hopkins University, which resulted in a joint publication in The Lancet.

I am open to discussing research proposals on a wide range of subjects given my research expertise. I am especially happy to consider working with candidates in the medical humanities; history of medicine, science and technology;  Cold War history; history of internationalism; women and gender history; disability history; and the history of Eastern Europe.

I regularly contribute to news media on the topics of epidemics, disability and vaccination. My work has been featured in The New York Times, the Financial Times, the BBC, The Guardian and El País.

In 2020 I contributed to the work of the World Health Organization Western Pacific office as member of their foresight think tank on the history of pandemics.

As member of The Reluctant Internationalists research group at Birkbeck, I was involved in providing training material for secondary school teachers on Cold War History and participated in public history events such as historical walking tours in London.

I am a long-standing supporter of, and have done voluntary work for the Hungarian Civil Liberties Union, an advocacy group for basic human rights.

I am co-editor of the journal Social History of Medicine, published by Oxford University Press. I have also been the curator of several online series, namely After the End of Disease on interdisciplinary collaborative website Somatosphere, and Europe in Crisis on The Reluctant Internationalists, co-edited with Jessica Reinisch (Birkbeck).

"Windrush scandal: a historian on why destroying archives is never a good idea"  The Conversation, April 24, 2018

“Strangling Angel’ of Diphtheria Caught Spain off Guard – here’s how”. (With David Bryan) The Conversation, June 10, 2015.

“Outbreaks of disease and war: polio’s history with conflict” The Guardian, May 8, 2014