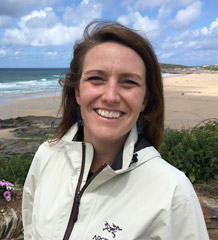 Professor Bryony Onciul is an Associate Professor in History at the University of Exeter, Cornwall Campus.

She researches and publishes on community engagement, indigenising and decolonizing museology and heritage, difficult histories, truth and reconciliation, identity and performance, understanding place and environment, and the power and politics of representation.

Bryony is the Director of PGT and the Director of a new MA and MRes in International Heritage Management and Consultancy. She teaches on the MA, MRes and Undergraduate programmes, with modules on heritage, public history, Indigenous history, heritage and environmental change, and leads the International Field Course to Canada.

Bryony is the author of Museums, Heritage and Indigenous Voice: Decolonizing Engagement, published by Routledge. The book focuses on Blackfoot First Nations engagement and self-representation in museums and heritage sites in Alberta, Canada. She is also the lead editor of Engaging Heritage, Engaging Communities published by Boydell and Brewer.

Bryony has ongoing funded research. Over her time at Exeter, these projects have included:

This project is funded by AHRC Translating Cultures/Care for the Future Innovation Awards on International Development.

This project was funded by the Exchange Grant. This was an interdisciplinary collaborative project with artist Louise Ann Wilson, theatre company Golden Tree and the National Trust.

This project was funded by the AHRC Care for the Future Early Careers Development Grant. This was an interdisciplinary collaborative project with the University of Exeter, University of Surrey, University of Leeds, University of Ulster, Indigeneity in the Contemporary World: Performance, Politics and Belonging, and the Peace and Reconciliation Group.

I welcome interest from potential postgraduate students in any of the following areas, in particular Indigenous history, material cultural, intangible heritage, sense of place, museology and heritage studies:

Alice Would. Provisional title: 'Fleshing out the animal: the taxidermy specimen and its production line' (Second Supervisor)

Amanda Phipps. ‘Representations of the First World War in Theatre during the Centenary’ (Mentor)

Will Rees. ‘“I Will Not Be Conquered”: Popular Music and Indigenous Identities in North America’ (First Supervisor)

Professor Bryony Onciul has been recognised for her outstanding teaching and was nominated for a teaching award in 2013 and received recognition of excellent in teaching from the Deputy Vice-Chancellor (Education) in 2017. Her modules are innovative and engaging, and informed by her current research. In 2018 she was a nominee for the Guild Teaching Awards in the category of Best Postgraduate Research Supervisor.

Associate Professor Bryony Onciul earned her BA in History and Politics from the University of Nottingham, MA in Heritage Education and Interpretation and PhD (funded by the Arts and Humanities Research Council) at the International Centre for Cultural and Heritage Studies at Newcastle University. She studied at the University of Auckland in New Zealand as part of her undergraduate degree and did extensive research in Canada as part of her MA and PhD.

Bryony’s research in history, heritage and museology continues to take her overseas and she is currently working on grant funded projects in the UK, Canada, and the Pacific.

Bryony previously taught at Newcastle University in the International Centre for Cultural and Heritage Studies. In September 2012 Bryony joined the University of Exeter and in 2018 she led the launch of a new MA in International Heritage Management and Consultancy.