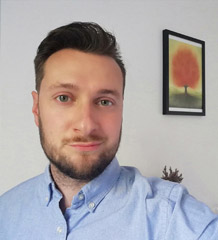 I am a historian of early modern Britain, exploring the histories of work, knowledge, freedom, and capitalism.

I am currently a Postdoctoral Research Fellow (started Aug 2020) on the project FORMSofLABOUR, led by Prof Jane Whittle and funded by the European Research Council. I am researching work, poverty and freedom in early modern England, with particular reference to pauper/parish apprenticeships (c.1572-1750), examining how poor law provisions interacted with various forms of labour and the labour laws.

My first book is titled The Enclosure of Knowledge: Books, Power & Agrarian Capitalism in Britain 1660-1800 and will be published with Cambridge University Press in September 2022.

I was previously Lecturer in Early Modern British Economic and Social History here at Exeter. Before joining Exeter, I taught at King's College London, Royal Holloway, and the University of East London.

My current research on pauper apprenticeships is a study of freedom at the intersection of work, poverty and youth in early modern England. I am investigating pauper apprenticeships as a form of coerced labour as well as a device of poor relief. Major themes include freedom and power, training and socialisation, and labour discipline. See FORMSofLABOUR.
My broader research sits at the intersection of histories of knowledge, books, labour and agriculture, centred on the early modern period, including:

The rise of agrarian capitalism in Britain is usually told as a story about markets, land, and wages. The Enclosure of Knowledge reveals that it was also about books, knowledge and expertise. It argues that during the early modern period farming books were a key tool in the appropriation of the customary art of husbandry possessed by farm workers of all kinds. It challenges the dominant narrative of an agricultural ‘enlightenment’, in which books merely spread useful knowledge, by showing how codified knowledge was used to assert greater managerial control over land and labour. The proliferation of printed books helped divide mental and manual labour to facilitate emerging social divisions between labourers, managers and landowners. The cumulative effect was the slow enclosure of customary knowledge. By synthesising diverse theoretical insights, this study opens up a new social history of agricultural knowledge and reinvigorates long-term histories of knowledge under capitalism.

I completed my PhD in History at King's College London in 2018, supervised by Prof. Arthur Burns and Dr. Alexandra Sapoznik.

I am trained in disciplines across the humanities and sciences. I have an MA in Modern History (King's College London, 2014), an MA in Political Philosophy (University of York, 2008) and a BSc in Physics (2006).