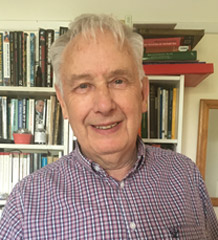 I worked as a primary teacher (in West Sussex, Hertfordshire and Devon) and as an advisory teacher (for history in the primary curriculum) in Essex before taking up a position as Senior Lecturer in Education at the College of St Mark and John in Plymouth (now Plymouth Marjon University). In my last two years there I was a Teaching Fellow, the equivalent of a Reader. From 1989 to 1990 I was a member of the Department of Education and Science National Curriculum History Working Group, helping to write both an interim and a final report for History in the National Curriculum for England. Since 2006 I have been interested in researching history education in South Africa, New Zealand and Australia. I have had research placements in four universities, three in New Zealand (Massey University, Palmerston North, Victoria University of Wellington, the University of Auckland, 2008) and one in Australia (the University of Tasmania, 2016). I was elected as Fellow of the Royal Historical Society in 2008, and was awarded a Fellowship of the Historical Association in 2015. I work at the cusp between the two disciplines of history itself and of history education. My MEd thesis (University of Exeter, 1988) was Primary School Children and the Learning of History – A Case Study. My PhD (University of Exeter, 2003) was The Development of Knowledge Bases for the Effective Teaching of Primary History: Case Studies of Postgraduates’ Reflections on Initial Teacher Training. I have edited two books, in 2012 (with Tony Taylor, then of Monash University, Victoria, Australia) History Wars and the Classroom – Global Perspectives (Charlotte, NC: IAP), and in 2016 (published with corrections as a paperback in 2017) Teaching History and the Changing Nation State – Transnational and Intranational Perspectives (London: Bloomsbury Academic). From 1985 to 1989 I was Chair of the Devon Association of Teachers of History. Since 2010 I have been Secretary of the Exeter Branch of the Historical Association, working closely with history staff to arrange annual programmes involving both local schools and the local community. I am currently involved in co-editing a special issue on history education in postcolonial settings, and am seeking to set up branches of a Commonwealth Historical Association.

Building on my placements in universities in New Zealand (2008) and Australia (2016) I have become interested in history education in the rest of the Commonwealth, particularly how history education has reflected the evolution of decolonization, and how it touches on problems of identity and inclusion. I have become interested in the history of the Commonwealth itself, and how its internal organisation (e.g. the Secretariat, its system of conferences, regulatory meetings and associated declarations and statements such as are linked with CHOGMs and CMAGs) has developed and how its component parts have given it significance and influence. I am currently involved in conversations with representatives of a small group of universities in Africa, South Asia and in the South Pacific about the possibility and feasibility of starting in their own localities branches of a Commonwealth Historical Association which could develop into a viable working network.

I am currently collaborating with Dr Peter Brett of the Faculty of Education in the University of Tasmania, Australia, to edit a special issue of the Historical Encounters Journal (HEJ) focused on history education in jurisdictions which have experienced decolonisation. Most of these jurisdictions are in the Commonwealth, but not all. I recently worked with two Ukrainian academics on a peer-reviewed paper about the relationship between national holiday celebrations in Ukraine and history in Ukrainian schools.

See under ‘Public engagement’ below.

Since 2010 I have been Secretary of the Exeter Branch of the Historical Association, working with the University’s history staff. The modus operandi of the branch has been to seek collaboration over sharing different aspects of the study of history at different levels (including debates) between the University of Exeter, local schools and colleges, and the local community. In one sense public debates can model good practice in historical discourse by juxtaposing contrasting interpretations, or by stretching the chosen academic focus to include unfamiliar contexts. Recently, it has struck me that this model could apply across a much wider voluntary network.

I am seeking to be a facilitator in setting up both a central organization and branches (which might locally have alternative names such as chapters or network-hubs) of a Commonwealth Historical Association (CHA). In order to gain official accreditation, the CHA would need to align with Commonwealth Secretariat expectations and its guidelines for new associations. This would include: (i) a commitment to the Commonwealth’s fundamental values and principles; (ii) representing the true diversity of Commonwealth countries; (iii) demonstrating accountability and transparency; (iv) being open to all Commonwealth members (across the four regions ofAfrica, Asia-Europe, Caribbean-Canada and the Pacific); and (v) showing an activity track record. What is challenging is to establish exactly how the Commonwealth’s fundamental values and principles developed in the cut-and-thrust of post-colonial and post-imperial settings, what kinds of gaps there are between theory, aspiration and the realities of practice in the histories of individual jurisdictions (especially in the areas of respecting and including different histories, epistemologies and identities), and how a civil society association based on the examination and/or enjoyment of history can best make use of the Commonwealth’s fundamental values and principles while still pursuing critical thinking in the context of scholarly, educational and community aims in its own evolution and development. A seminar I gave in the College of Humanities in January 2019, and the Q&A after it, addressed some of these problems.