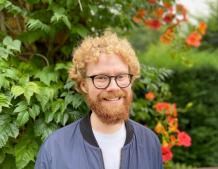 I am a historian of medicine and psychiatry, British colonialism, and the modern Middle East. My first book, Mandatory Madness: Colonial Psychiatry and Mental Illness in British Mandate Palestine, is currently under contract with Cambridge University Press. Research from that project has also been published in the Historical Journal, Contemporary Levant, and the Jerusalem Quarterly, and is in progress for a forthcoming edited collection on the social history of Palestine and a special issue on the politics of medicine in the modern Middle East.

I have also published separately on the history of migration within the late nineteenth- and early twentieth-century British empire in the western Indian Ocean, for Modern Asian Studies, and on the haunting resonances between the contemporary Covid-19 crisis in UK care homes and the experiences of patients and nursing staff in a nineteenth-century English asylum during the devastating mid-century cholera pandemic, for the Conversation in summer 2020.

I am currently in the early stages of a new research project, which explores the intersection between histories of migration and mobility and histories of mental illness and treatment in the late nineteenth and early twentieth centuries across a wide geography stretching from western India to Britain.

In 2022, thanks to nominations from my students, I was very proud to receive a college teaching award in the category of 'Outstanding Teaching'.

I am primarily interested in the histories of medicine and psychiatry, the modern Middle East and particularly Palestine, and British colonialism. My work to date has focussed on the intersection between all three of these areas, through my research on the history of colonial psychiatry and mental illness in Palestine in the first half of the twentieth century. Within that project, I have been particularly interested in: the emergence of the psy-disciplines in the modern Middle East; the transition between the Ottomans and British in Palestine; histories of migration and connection which embed Palestine within the wider regional context; the relationship between psychiatry and religious 'alternative' understandings and practices around 'mental illness'; the agency of Palestinian families in petitioning on behalf of relatives deemed mentally ill; the use, re-use, and haunting of particular sites within Palestine across the century; the connection between political violence and mental illness; and the nature of the relationship between Palestinian Arabs, European Jews, and the British mandate between 1920 and 1948. For me, the history of psychiatry and mental illness opens up new and exciting social histories of Palestine.

I welcome inquiries from prospective research students interested in the histories of medicine and psychiatry, the modern Middle East and particularly Palestine, and British colonialism. I would be especially happy to discuss research proposals with prospective students interested in working at the intersections of these areas. Please do reach out to me by email if you have an idea for a research project which you would like to discuss - I would love to hear from you!