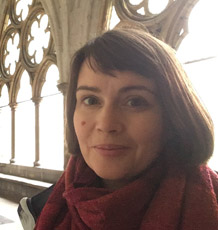 I am a Senior Lecturer in Medieval History with expertise in twelfth-century Britain and Ireland, intellectual and religious culture, medieval monasticism, hagiography, and communications. My main research interests concern the construction of texts and narratives in the central Middle Ages, and the ways in which recent information, particularly news, was transmitted and preserved.

I completed my doctorate under the supervision of Profs Jocelyn Wogan-Browne and Christopher Norton at the University of York in 2009 and have since held postdoctoral fellowships at the Pontifical Institute of Mediaeval Studies, Toronto, and the Institute for Advanced Studies in the Humanities, Edinburgh. I joined Exeter's history department in 2011. I have published a monograph, The Saints’ Lives of Jocelin of Furness: Hagiography, Patronage and Ecclesiastical Politics, as well as several articles. I am currently working on two projects: the first explores the concept of news in the Middle Ages; the second investigates how the communication networks of the Cistercian Order functioned in practice.

I am a member of the Centre for Medieval Studies and teach on the Centre's MA programme.

My general field of research concerns religious history in the central Middle Ages, with wider interests in medieval intellectual and cultural history, the interaction of orality and literacy, and communication. I have particular expertise in the study of hagiography. My book, The Saints' Lives of Jocelin of Furness, examined the four hagiographical texts written by the Cistercian writer Jocelin of Furness (fl. 1175x1214) for various patrons in Britain and Ireland. My research combined detailed analyses of the composition of Jocelin’s texts with study of their patronage, audience and contemporary contexts. As well as highlighting the work of a significant, but little known, twelfth-century hagiographer, my work provided new insights into the religious and political concerns of ecclesiastical and monastic communities in England, Scotland and Ireland c.1200.

For the past few years, I have been researching the concepts of 'news' and 'the present' in the Middle Ages. This work responds to debates in early modern and modern studies, and challenges the overly simplistic narratives of change that currently dominate the discussion of historical news. The results of this research are being disseminated in three articles. The first, published in Viator, offers a framework for the identification of medieval news texts and explores the logistics of news through a case study: the transmission of news relating to the Battle of Hattin, the Fall of Jerusalem, and the launch of the Third Crusade in late 1187. The other two articles are works in progress. The second article investigates how and why medieval scribes chose to preserve the news texts relating to the 1187 case study. The third article discusses the temporal aspects of news and how it relates to the medieval experience of time. I am also currently leading a collaborative project on 'News and News Cultures in the Middle Ages'. Together, my team is producing an overview of the concept and communication of medieval news, which also highlights the key research questions to be pursued in the future.

Alongside this, I also continue to investigate the communication of stories through Cistercian networks in the late twelfth century. Previously, I have explored this topic in relation to Melrose Abbey and its networks. However, to examine how Cistercian communications functioned in practice I have turned my attention to a richer source base: Caesarius of Heisterbach's Dialogus miraculorum. I am currently using network analysis to explore the different networks in this text, both fictional and 'real'.

My current work on the Dialogus miraculorum has been made possible through interdisciplinary collaboration with Pádraig Mac Carron, a physicist based in Limerick, and the Traveler's Lab group, based at Wesleyan University.

I welcome enquiries from students and postdocs with research interests in the following areas:

If you would like to work with me, then please send an e-mail outlining your proposed project along with a CV and a sample of your recent work.

I teach on a number of undergraduate and postgraduate modules, but the following are most closely related to my research interests:

I try to make use of local archival resources in my teaching wherever possible, and have held manuscripts sessions for both undergraduate and postgraduate students at the Exeter Cathedral Library and University of Exeter Special Collections.

I completed an undergraduate degree in History at King's College London before returning to the north to study for a Masters in Medieval History at the University of York. I stayed at York for my doctoral research under the supervision of Prof. Jocelyn Wogan-Browne and Prof. Christopher Norton and was awarded a PhD in Medieval Studies in 2009. After this I undertook a four-month internship at Brepols Publishers in Belgium and then re-located to Toronto as a Mellon Fellow at the Pontifical Institute of Mediaeval Studies in 2009-10. In 2011 I was granted a six-month fellowship at the Institute for Advanced Studies in the Humanities at the University of Edinburgh. In 2011-12 I joined History at Exeter as a temporary member of the teaching staff and was subsequently appointed to the permanent position of Lecturer in Medieval History in 2012. During this time, I was also elected a Fellow of the Royal Historical Society and was awarded the postdoctoral degree of Licence in Mediaeval Studies. Since then I have held visiting research fellowships at the Center for Medieval Studies, Fordham University, and the Center for the Humanities, Wesleyan University.