Skip to main content
College of HumanitiesHistoryResearchEconomic and Social HistoryWomen's work and the idea of housewifery in the memoirs of a Devon yeoman, 1593

Women’s work and the idea of housewifery in the memoirs of a Devon yeoman, 1593 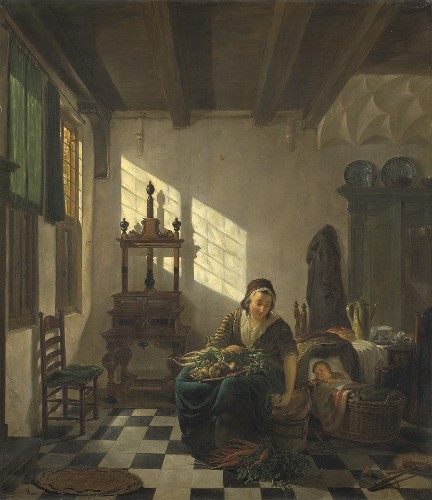 Housewifery took centre stage in ideas about women’s work, skill and expertise in early modern England. Yet when historians approach women’s work they have tended to use analytical frameworks that favours male occupational models and modern understandings of work. Thus studies have concentrated on looking for women’s participation in particular occupations and in paid work, and have been dismissive of housewifery. In my recent Past and Present article I criticised historians’ approach to women’s ‘domestic work’. My aim is to follow that up with an article on housewifery, which explores how this architype of women’s work and skill was characterised during the early modern period. This blog focuses on one strand of that, the remarkable family memoir of Robert Furse, a wealthy Devon yeoman, written just before his death in 1593, and recently published in an excellent modern edition by the Devon and Cornwall Record Society.

Robert Furse and his relatives existed on the cusp of the gentry: Robert himself purchased a manor late in his life so that he could call himself a gentleman. A number of his ancestors came from the minor gentry or married into them. Others had more humble origins, including a carpenter and an inn-keeper, although most were farmers. The memoir was written for the benefit of Furse’s son, John, and is primarily a record of the family’s landed wealth, tracing the land bought, sold and accumulated by generations of relatives spread across the county of Devon and stretching back to the fourteenth century. But it is also about people, and relates the history of particular relatives. In part, this was to demonstrate the pitfalls that might undermine a family’s wealth (idleness, misjudged marriages, vexatious lawsuits, ruthless stepfathers), but also to demonstrate what could be done well. Among the positive traits that Robert Furse emphasises are good husbandry and housewifery, as well as education and intelligence. In this blog I concentrate on his comments about good housewifery and women’s behaviour.

It is important to note here that the original meaning of housewife had nothing to do with working within the house, or with housework, and little to do with marriage. The housewife, or to use the medieval form, the ‘huswif’ was the female equivalent of the husband or ‘husbond’. The husband was the male head of household (house + bond/peasant), while the huswife was the female head of household (house + wif). At this date the word ‘wif’ simply meant ‘woman’, not necessarily a married woman. Derived from these words are ‘husbandry’ and ‘housewifery’, denoting the work and skills of the husbond and huswif. In the sixteenth century we find both ‘husbandry’ and ‘huswifery’ being used to mean good economic management with thrift and prudence, as well as competence in a set of practical skills needed to run a farming household.

Robert Furse is particularly striking in the way he complements only certain women in his family for their skills as good housewives, implying that these were not commonplace skills that were achieved by every woman. His family history names and describes over a hundred of his ancestors, but he reserves the complement of good housewifery for three exceptional women. Annes Furse (nee Adler) was his paternal great-grandmother, who died in 1540 at the age of 80. She was a widow for thirty years after her husband’s death ‘and maintained a very good house … and was a woman of great wealth’. Robert writes ‘she was in her lifetime a very wise and discrete woman and a perfect good housewife and a careful woman for her business’. He approvingly lists a series of leases she had arranged during her widowhood.  The second was Nicole Moreshead (nee Sparke), his maternal grandmother. Her husband was wayward in his youth, and even after marriage had a difficult relationship with his father. Furse notes that it would have been ‘much to his hindrance if his wife had not been for her painfulness, great labour and wise behaviour, did many time pacify the old man’s [his father] anger’. In her youth Nicole was ‘a great labourer’, ‘a very beautiful woman decent in her apparel and a perfect good housewife’. Like Annes she ended her life with a long widowhood. According to Furse, in her nineties ‘she was a very good alms woman and liberal with the poor …. she lived until she was near 100 years of age’.

The third and perhaps most interesting woman was Joan Rowland, his wife’s mother. Her first husband died in 1560, and she lived another 33 years. She made a disastrous second marriage which lasted 19 years, to a minor gentleman who quarrelled with her, ‘forsook her company’, ‘misused her and put her in great danger of her life’, and wasted her wealth and goods. With the aid of her friends she obtained a legal separation, and spent the rest of her life circulating between the households of her married children, including that of Robert Furse. Despite this history he writes of her: ‘this Joan was a wise woman and decent in her apparel, an excellent good housewife and careful, a perfect woman to do anything with her needle, to knit, to make bonelace. She was a fine cook and well esteemed of all people, she was much bent to fast, pray and give alms to the poor, she was a pleasant woman in company and was ever of honest life and good conversation ….’ Thus even a disastrous marriage and the lack of one’s own household did not preclude a woman being considered an ‘excellent good housewife’.

As Garthine Walker pointed out some years ago, being a good housewife was important part of a woman’s reputation. Furse is not a disinterested commentator: it served his purpose to enhance the reputations of his forebears. It is helpful therefore to contrast his ‘good housewives’ with female relatives who he chose not to describe in this way. His strongest comments are reserved for a relatively distant relative, the wife of one his grandfather’s brothers, who consumed her husband’s wealth ‘wantonly in bringing up her children in idleness and pleasure’. Others are criticised for particular actions. The second wife of his grandfather, was ‘a gentlewoman born’ was ‘a very good woman but … she had many children and a mighty kindred’, as a consequence her husband had to pay her debts when she died. His third wife, Margaret Cuttleyefe, was ‘a very trim woman wife and a discreet woman’. She successfully went to law to get her husband released after he was wrongly imprisoned in the aftermath of the Western Rebellion of 1549. But Furse criticises her for failing to execute his grandfather’s will as she should have done, and selling some of the family silver. Nicole Earle, the daughter of his aunt, suffered from the early death of both her parents: ‘she was a little woman and rudely brought up’. When her husband died she made legal errors and alienated all their marital wealth to his family.

Both husbandry and housewifery encompassed two distinct elements. One was the ability to manage a household, and the wealth and property that was needed to maintain prosperity. The other was a set of distinct work skills. As Furse’s book is largely concerned with managing property he says little about work skills, although he mentions cooking and needlework as we have seen above. It is necessary to turn elsewhere, such as to Gervase Markham’s The English Housewife (1615) to understand housewifery as a set of skills. Nonetheless, it is striking that Furse places considerable emphasis the necessity both for hard work and intelligence as essential elements of housewifery.  For instance, he begins his book with advice to his son on choosing a wife which starts by saying, ‘get thee a wise woman and she shall rule well thy house and that in good order’; as well as noting ‘a wise woman can play the parts of a gentlewoman and of a good housewife, but there are some clean fingered gentlewoman that can do nothing but sit at home and pick in a clout [do embroidery] or suchlike service’. Thus my argument is that early modern commentators placed more emphasis on women’s abilities and skills than many historians have done, and we cannot fully understand the values placed on women’s work in the period unless we take care to consider the many meanings of housewifery.