Skip to main content
College of HumanitiesHistoryResearchEconomic and Social HistoryThe devill & pox rott them all: networks of care in early modern England

‘The devill & pox rott them all’: networks of care in early modern England 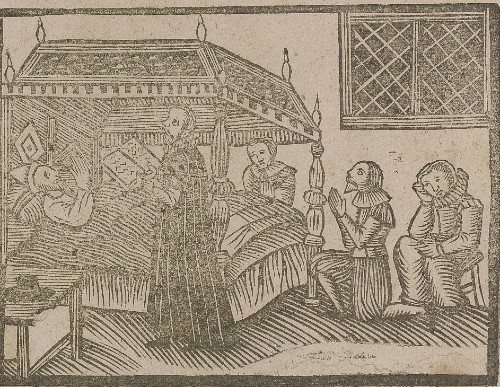 In April 1674, Richard Howell alias Taylor of Hopton in the Hole (or Hopton Cangeford) in Shropshire died.  His death may have passed without any real fanfare (and may have left no trace in the archives) had it not been for a subsequent dispute that arose between his sister Elizabeth Mathews and a man named John Evans over entitlement to Richard’s property.  In a suit heard in the church court of the diocese of Hereford that lasted over a year, depositions from nine witnesses tell us about Richard’s final months and the care he received during his sickness.

We learn just a little about Richard himself.  ‘Alias Taylor’ was added to his name because (as witnesses note) he was illegitimate.  His age isn’t given, but Richard was probably not a young man: one witness reported that she had known him for what I think says ’50 years’ (although an unhelpful tear on the page makes it unclear!)  We don’t know the cause of his death, although his neighbour testified that Richard ‘was troubled with a weakness in his Limbs’, suggesting he was bed-ridden or of limited mobility.  His social status is unclear: he is described as having been ‘for sometime a workeman with John Evans’, and in these records, ‘workman with’ usually means ‘workman for’.  He appears to have been single and lived alone.

Competing testimonies on the behalf of plaintiffs and defendants can make it is difficult to establish a straightforward narrative of what actually happened.  But in this case, although different versions of the ‘truth’ are presented by witnesses, the events they recall in their testimonies largely align.  We can therefore roughly map out the last six months of Richard’s life:

A fortnight before Christmas 1673, Richard fell sick at John Evans’s (the defendant) house and remained there for around five weeks.  Some witnesses insisted he was well looked after by John, while others contended that Richard sent for his sister Elizabeth (the plaintiff) who diligently looked after him while he was there.  Three weeks after Christmas, Richard asked Elizabeth and her husband, William, to help him return home to Hopton as he became ‘unwilling to trouble’ John any longer.  Perhaps his condition worsened because on 31 Jan 1674, he sent for John Baley and John Slade to witness him make a Deed of Gift, entitling his sister to ‘all that I have’.  Over the next two months, Elizabeth and her husband appear to have been primarily responsible for his care.  But they lived in Brimfield in Herefordshire, around eight miles away from Richard’s home, and so sometimes hired people to care for him when they could not.  Particularly between Sat 14 and Mon 23 March, Abraham Powell was appointed his carer and received a wage for his labour.  It’s at this point that the story takes a bit of a turn.

On the afternoon of Sun 15 Mar, Richard called his neighbour, Elizabeth Maylard to his house.  She was summoned (along with Abraham, Richard’s temporary carer) to hear his new intentions for his property: he had now decided to give half to John Evans and made him executor of this nuncupative will.  The following Sun (22 Mar) Richard made plans to return to John’s house after three months away.

But all this seems to have been occasioned by Elizabeth and William Mathew’s absence from Richard’s house for – as Abraham reckons – nine nights and ten days.  They returned on Mon 23 Mar and persuaded him not to go to John’s house.  Instead, they arranged for him to come to their own house in Brimfield.  Around 10 Apr, Richard made the eight-mile journey from Hopton in a bed loaded upon a cart, accompanied by his sister and her husband, their apprentice and a ploughmaker (who might have supplied the cart).  On the journey, Richard requested a stop-off at an alehouse called The Bell in Ludlow, where he informed the hosts, Charles and Margaret Hopton that Elizabeth, his sister was to be the sole heir to his estate when he died.  No mention of John Evans was made.

Richard stayed in Brimfield until his decease on 25 April.  John Evans must have moved swiftly to seek administration of the will and claim Richard’s goods.  Less than one month after Richard died, the first two witnesses had travelled to Hereford to depose on Elizabeth’s behalf against John Evans’s claim.  Intriguingly, Abraham Powell, the final witness to testify in the case over a year later, mentioned that before Richard left for Brimfield, he reminded Abraham that John Evans was to be his executor and was to receive half his goods, adding these ominous words: ‘When I am dead, the game will begin’.

Testamentary disputes like this are so frequently centred around care.  This is a tussle between two parties who both felt they had a right to Richard Howell’s property by virtue of the care they had provided.  Care had a widely acknowledged economic value in early modern society that testamentary cases highlight.  Where a child’s parents had died, litigants quibbled over whether the costs incurred by their legal guardian in maintaining them were offset by the labour the child had performed under their roof.  Elsewhere, the specific costs of maintaining the sick, young and elderly are set out in detail.  Yet the role of care is often downplayed in studies of early modern inheritance and property transfer, while kinship is instead emphasised.  But testamentary suits tell us an enormous amount about the dynamics and workings of care, including the physical toil, economic costs and emotional labour of care.

Richard Howell was a single man living alone (an uncommon household type in early modern England, that has yet to really be studied).  He appears to have had no servants.  The testimonies recorded in this case offer a relatively unusual glimpse into how the care of a man of limited means (although clearly he was not of no means) was managed and experienced.  Some forms of support appear to have been in place before Richard’s five-month decline.  His neighbour, Elizabeth Maylard assisted in his care: she deposed that she ‘did wash most of his Linnens for which he agreed with & paid [her] yearly’ and brought him milk regularly.  She also noted that once Richard had returned to his home from John Evans’s house, he would ‘make a noise whereby [she] and others did goe unto him’ upon Elizabeth and William’s absence.  She brought him milk and food, for which she later received compensation from his sister.  When he returned home, his care was provided for by his sister and her husband – but they lived a considerable distance away and so this must have placed a strain on their home and working life.  The couple also appointed and hired people in their stead to care for Richard: Abraham Powell lived in with him for 10 days and attended upon him.  Care appears to have fell to a community of carers rather than one person.

Church court depositions are full of references to women watching over and attending the sick, often with little indication of whether they received pay.  The line between care as a form of work and a form of charity or familial obligation was blurred in early modern England (as it is today).  But whatever the practicalities, there appears to have been an expectation that care work should be remunerated in early modern England.  In this dispute, little (if any) care work was unremunerated and expectations of compensation were clear.  But the economic side of care was not straightforward, nor was the relationship between care-giver and the sick.  It could be incredibly fraught.  John Evans charged Richard £3 for staying with him, which caused Richard to be ‘angry’ as this was apparently ‘more than he was willing to pay or that he ever paid for dyett before that’.  When Richard returned home in Hopton and subsequently moved to Brimfield, John apparently failed to visit him, but witnesses deposed that ‘nor did the deceased desire his company being very angry with him’.  When we think of friendships and social relations, we tend to think of long-lasting connections and deep affections cemented and consolidated over time.  But a period of sickness could alter and even destroy relationships.

The word ‘angry’ is used in several of the depositions to describe Richard’s feelings towards his sister, her husband and John.  The emotional side of care was not just bound with economic concerns.  Richard’s decision to bequeath only half of his estate to Elizabeth was founded on what seem to be feelings of abandonment.  During Elizabeth and William Mathews’ absence from his house in March, Richard allegedly often said ‘the devill & pox rott them all’.  One witness commented on the testator’s character at this time, describing him as ‘a cross or forward person’ who would be ‘displeased when Mathews and his wife did stay longer from him than he expected & would swear and curse at them’.  Distance clearly heightened feelings of anger and perhaps loneliness and abandonment.  Richard attached an economic value to those feelings, choosing to reduce Elizabeth’s inheritance while she remained away.

While some of the eleven witnesses sought to promote Elizabeth’s case, others backed John’s and we can never know exactly what Richard Howell’s wishes for his property were.  My hunch is that he simply changed his mind regularly, basing his evaluation on a combination of the physical, emotional and economic support he felt he had received from the opposing parties.  These remarks are from the testimony of ploughmaker, John Haines who accompanied him on the journey from Hopton to Brimfield, and they capture this sentiment perfectly:

‘When he the said deceased was brought unto the said house he desired to have his bedd laid before the fire but the said William told him that it wasbetter to lay his bedd by the side of the Chimney near the fire, more convenient then the place where the deceased desired to lye And thereupon he the said deceased said I wish I were at my Mr Evans his house againe (meaning the producents house) & repeated the same words againe at the same time whereunto the said William Mathews replyed & told the deceased that if he had a desire to goe unto his Mr Evans he would send him notice by his man that he might come & fetch him, to which the said deceased returned noe Answear.’

Shepard, A., Accounting for Oneself: Worth, Status, and the Social Order in Early Modern England (Oxford, 2014), esp. Chapter 6.