Skip to main content
College of HumanitiesHistoryResearchEconomic and Social HistoryInventing a New Form of Labour: Early Indentures for Parish Apprentices, 1598-1630 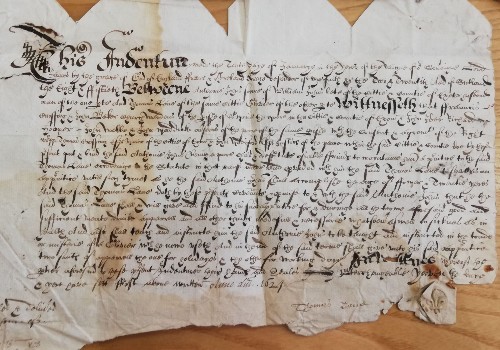 An early indenture for a parish apprentice from 1624, binding Anthonie Johns to Thomas Lane in St Mary Major, Exeter (Ref: 51/1/16). With permission from the Devon Heritage Centre.

An indenture for apprenticeship written on 12th August 1605 stated that a young girl in Exeter named Elizabeth Whittye ‘hath by her owne free will and assente... Putt her self an Apprentice'. But it also stated that she did so with the consent of the churchwardens and overseers of the poor, ‘according to the termes of the Statute’. This almost certainly referred to the recent Poor Laws of 1598 and 1601, which granted legal power to parish officers to bind poor children to other households until the age of 21 (girls) or 24 (boys). A defining characteristic that distinguished these new parish (or pauper) apprenticeships from established private apprenticeships was that the binding was compulsory rather than voluntary (at least in principle). The juxtaposition of the claim that Elizabeth bound herself voluntarily – as found in private indentures – with the apparent exercise by parish officers of their legal authority under the poor law, is therefore a little puzzling. It complicates the neat distinction between the two forms of apprenticeship. While I do not wish to overstate the importance of such phrasing for the practice of apprenticeship, the wording of such legal documents mattered. As a minimum, they offer some insight into the administration of this new form of labour and the attitudes of authorities.

The earliest indentures I’ve found for parish apprenticeships are full of similar surprising features. Yet these have been overlooked because the vast majority of studies have relied on indentures from the eighteenth century (e.g. Lane), with some stretching back to around 1660 (e.g. Farrell), and almost none from before 1630 (e.g. with partial exception of Sharpe). Moreover, previous studies have been almost entirely quantitative, recording the countable particulars (ages, genders, trades). Qualitative analysis has been mostly limited to anecdotal peculiarities of individual indentures, giving only an impressionistic picture. This is partly an effect of a focus on the later period: indentures after 1700 were highly standardised, often using printed templates, with little variation across time and space. Such standardisation seems to limit any meaningful textual analysis beyond identifying the standard form itself. While this may be unproblematic for the eighteenth century, indentures from the first half of the seventeenth century present a different challenge.

A more subtle reason why variation has been overlooked is the modular structure of indentures (and indeed most contracts). By which I mean, they were constructed by selecting and combining standardised units (i.e. clauses), enabling a high degree of diversity between indentures when considered as a whole. Hence on first encounter indentures appear more consistent than they actually were, because each one contains a series of familiar clauses which can be found elsewhere, yet rarely the same ones in the same combination. The flexibility of the modular design also means there is a systematic pattern to their variation (rather than myriad small and arbitrary deviations), which makes both qualitative and quantitative analysis possible.

Before the analysis, some background. An indenture was a formal written contract in a specific material form (two versions cut in a unique jagged line for later authentication), which had been used to bind apprentices since the thirteenth century and were further institutionalised by the Statute of Artificers 1563, which extended the custom of London across the kingdom, including binding by indenture. Parish apprenticeships were established in a statute for the relief of the poor in 1598, but their administration was vague. Clause IV gave power to churchwardens and overseers, with the consent of two Justices of the Peace, to bind poor children as apprentices, 'to be as effectuall to all purposes as if suche Child were of full Age and by Indenture of Covenant bound him or her selfe'. Setting aside the thorny question of consent, we can note that although an indenture was referenced as the legal benchmark, it was not explicitly mandated. The first guide books interpreting the statute for magistrates and local officers made no mention of indentures. It was only in the second edition of The Country Justice in 1619 that Michael Dalton added a crucial note: 'but such binding must be by Indenture' (82). It therefore appears that there was initial uncertainty regarding whether an indenture was required at all.

The first model parish indenture, providing a full template, was published in the 1630 edition of Dalton’s guide. This provides a useful reference point to compare actual indentures produced up until 1630. We can also use a model private indenture, published in 1590, as another reference point (from a guide for scriveners, Symbolaeographia, sect.398). For the purpose of simplification I will assume for now (and interrogate later) that this private indenture was a stable standard, as the consensus is that they were standardised by the mid-sixteenth century. In short, the 1590 model shows the standard indenture that had to be adapted when drawing up new parish indentures between 1598 and 1630, while the 1630 model shows the first published attempt to define a new standard for parish indentures.

For illustrative purposes, I have selected three key differences between the 1590 private model and the 1630 parish model and summarised these in the table below:

I have transcribed a small sample of 20 parish indentures from 8 parishes in Devon. It must be stressed that this is not a representative sample, so precise figures are unimportant. It is also worth noting that these are mostly from towns, crucial to understanding the administrative process that produced them (see below).

The following table shows how many indentures exhibit the feature of each model, along with alternatives to both.

*These add up to over 20 as some indentures include more than one, as discussed below.

As can be seen immediately, the sample of indentures binding poor children before 1630 did not adhere to a single standard. Indeed, almost the only element they have in common is the explicit involvement of parish officers and / or magistrates in arranging the apprenticeship, which distinguishes them from a private indenture. Perhaps more importantly, they do not obviously align more closely to either model, and clearly retained key features of private indentures.

The questions of contracting parties and binding power are central to the fundamental distinction between voluntary private and compulsory parish apprenticeships. It is striking that half are structured as an agreement between child and master in the same manner as a private arrangement, in which the parish officers are described as ‘consenting’ parties. None adopted the form later recommended by Dalton, in which the indenture simply witnessed the unilateral action of parish officers. Instead, many chose the alternative in which parish officers replace (or join) the child as one contracting party.

Similarly, almost half stated that the child bound themselves, although a slight majority stated clearly that parish officers were binding the child. All those in which the child was the sole contracting party with the master state that they bound themselves. However, some contain a peculiar mix. For example, in 1600 Agnes Tooker’s indenture named her as a contracting party, yet explained that because she was in receipt of poor relief, the churchwardens and overseers 'have putt and bound thesaid Agness’, but then added that ‘she thesaid Agnes doth also putt and bynd herself Apprentis'. While using their power to bind a fatherless girl to long-term service in ‘housewiferie’, the authorities stuck closely to the model in which boys apprenticed themselves to crafts. Did they believe this was Agnes’ genuine will (but what choice did she have anyway?), or was this merely a legal fiction? Either way, these differences in the fundamental nature of the covenant raise questions about the kind of arrangements being made.

The exchange of labour for training was the defining characteristic of private apprenticeships. There is a broad consensus that training was not the primary purpose of parish apprenticeships, but the relative role and importance of training (or learning of some kind) is unclear. Some suggest it was irrelevant, while others stress that it continued to be an important secondary purpose in certain contexts. It is therefore notable that nearly all, 18 out of 20, included a training clause (only one of which altered the standard phrasing). Only two excluded it entirely, and both involved girls.

In the long term the training clause was progressively excluded from parish apprenticeships, but not in a straightforward manner. A clear example is that Dalton consciously added the training clause into his model parish indenture in his 1635 edition, which was then maintained through all later editions to 1677. Some other guides included it, others did not. There was therefore a range of opinion throughout the seventeenth century about the expectations of a parish apprenticeship. Now of course an indenture alone does not tell us about the actual learning experience of the child. But we know that for private apprenticeships a master’s failure to provide suitable training could be grounds for discharge by the courts. One line of enquiry therefore concerns whether this ever occurred with parish apprentices. In any case, mapping the pattern of training clauses in relation to location, gender and trade could be revealing about varying expectations.

An obvious objection to all the above is that these clauses had become empty formulae that were included or not based on the habits or arbitrary whim of a bored clerk. My response is that we do not know their significance until we investigate them. The relationship between the wording of indentures and practice, the extent to which they shaped it directly through legal force or through the more subtle assertion of customary norms, is an open question, and one that can only be answered through careful reconstruction with other sources.

In summary, I want to make two key points about the earliest phase of parish apprenticeships. Firstly, there was no single standard form of an indenture. Consequently, early indentures are a richer source of evidence than has been previously recognised, with potential to provide insights into how pauper apprenticeships were understood and implemented. And rather than examining a static standard, we need to trace the dynamic process of standardisation over time.

Secondly, poor law authorities modelled parish apprenticeships very closely on private apprenticeships. It clearly took time for parish apprenticeships to develop into a fully distinct form of labour, with its own conventions. As with the implementation of other poor law provisions, this was no doubt slow and uneven across the country. The typical parish apprenticeships more familiar from the eighteenth century did not emerge fully formed from the statute, but had to be invented through countless local interpretations and experiments based on borrowings and revisions from existing labour relations

Note: Sample indentures from: city of Exeter (6), borough towns of Totnes (4) and Barnstaple (3), and the market towns of Okehampton (3) and Modbury (1), with only a couple from more rural parishes of Sampford Peverell (2) and Bishops Tawton (1).

Dalton, Michael, The countrey iustice containing the practice of the iustices of the peace out of their sessions (London, 1630)

West, William, Symbolæographia. Which may be termed the art, description, or image of instruments, couenants, contracts, &c. Or the Notarie or Scriuener (London, 1590).