‘Forget not the feasts that belong to the plough’: Festive Work Relations in Thomas Tusser's Five Hundred Points of Good Husbandry 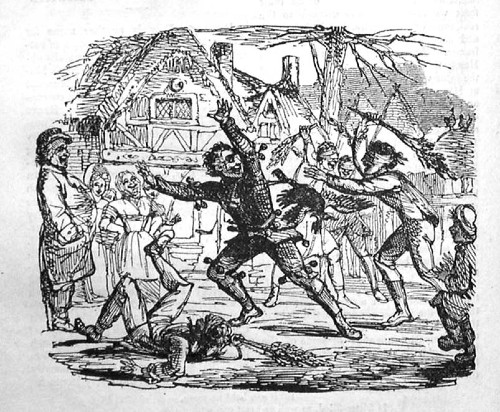 This blog post explores the relationship between work and festivity (and play more generally) in early modern England, through the lens of Thomas Tusser’s Five Hundred Points of Good Husbandry united to as many of Good Huswifery.¹  Tusser’s poetic advice manual on Elizabethan agrarian life provided useful and entertaining information for modest landholders, addressing the farming year, working day, and household management, among other subjects. Published and reworked in stages from 1557 until the author’s death in 1580, it was immensely popular during Elizabeth’s reign (perhaps the best-selling book of poetry), with eighteen editions in the 16th century and periodic re-printings throughout the 17th. During the 18th and 19th centuries the treatise remained a cultural touchstone, with new editions adding commentary which reflected contemporary rural practices. Structured around the agrarian calendar, issues of seasonality and festive custom naturally pervade the text. Yet one section in particular celebrates the feasting days of rural servants and workers, and that will be my focus here.

But first, a little more background on the author and the publication history. Thomas Tusser was a gentleman farmer and poet, born around 1526 in Essex. Educated at St Paul’s, London (as a chorister), Eton College and then Cambridge University, Tusser began his career as a musician at the royal court, under patronage of William Paget, from around 1544 to 1552. After his patron fell from royal favour, Tusser left court, married, and took up farming in Cattiwade (Suffolk). Here he began writing his farming manual, initially entitled A Hundred Points of Good Husbandry (published 1557). Due to his wife’s ill health, Tusser moved to Ipswich (where his wife died) and then settled with a new wife and family in West Dereham (Norfolk). They would move again to Norwich, and finally to Fairsted (Essex), where Tusser would spend the remainder of his life farming on tithe land. Although not a particularly successful husbandman, Tusser’s real and varied experience as a farmer in Suffolk, Norfolk and Essex would greatly influence his poetry.

Over the last two decades of his life, Tusser continually shaped his husbandry manual. In 1562 he ‘married’ his hundred points on husbandry (focused on the husbandman’s monthly tasks) to ‘a hundred good points of huswifery’ (focused on the huswife’s daily labours). This format was published again in 1570 and 1571, and then in 1573 expanded to ‘five hundred points’ of advice. This was essentially the final form of the book, though there were small changes and additions throughout the 1570s, and particularly in the 1580 edition. As will be discussed below, these small edits could significantly supplement or alter meaning.

Subsequent editions largely copied the 1580 format, until Daniel Hilman’s Tusser Redivivus (1710). This was a partial re-print with substantial ‘observations explaining many obsolete terms…and what is agreeable to the present practice’. Later scholarly editions in 1812 (Mavor), and 1878 (Payne and Herrtage) would follow Hilman’s lead, attempting both interpretation and contemporary comparison. As a result, the many editions of Five Hundred Points of Good Husbandry provide something of a running commentary on rural industry and custom in England from the mid-16th through the 19th centuries, with notes on change over time and regional differences.

This intertextual conversation is particularly pertinent to the section called ‘the ploughman’s feasting days’. First appearing in the 1570 edition, in the ‘book of huswifery’, it describes a series of celebrations important to servants-in-husbandry. The opening quatrain sets the stage:

forget not the feasts that belong to the plough.

The meaning is only to joy and be glad,

for comfort with labour is fit to be had.

Stanzas follow dedicated to each feast and its associated activities. They proceed in calendrical order, starting with Plough Monday – traditionally the first day back at work after Christmastide break:

Plough Monday, next after that Twelfthtide is past,

bids out with the plough, the worst husband is last.

If ploughman get hatchet or whip to the screen,

maids loseth their cock if no water be seen.

This quatrain captures the general spirit and form of the others which follow. For simplicity’s sake, I have distilled the rest of the poem into a chart below, summarizing and interpreting where possible. Of course, the Plough Monday stanza also captures just how difficult interpretation can be when dealing with obscure terms and festive customs. What is going on with the ‘hatchet or whip to the screen’ or the cock and the water, for instance?

To parse these customs’ meanings, historians and literary scholars have perhaps been too quick to rely on subsequent commentaries. Payne and Herrtage (1878) and Mavor (1812) drew heavily on contemporary descriptions of festive ‘survivals’, and most heavily on the ‘observations’ of Daniel Hilman. While an early modern himself, Hilman was a surveyor from Surrey who wrote 140 years after Tusser. His explanations of these feast day activities likely say more about customs in his own time and region than they do about Tudor East Anglia. We should not fall into the trap of thinking festive customs immutable or invariable.

Indeed, Tusser supplies direct evidence of regional variance in these feast day traditions through his own glosses. From the 1580 edition onwards, glosses indicate in which (nearby) counties these customs were found (i.e. they were not universal). Such glosses replaced older ones (from the 1570, 1571 and 1573 editions) which clarified the feast day occasion, sometimes with comical redundancy. For example, the stanza, ‘Shrovetide: At Shrovetide to shroving, go thresh the fat hen’ includes the superfluous gloss *At Shrovetide.

Still, elsewhere the glosses provide our only direct evidence of occasion. Using these glosses, and prioritizing contemporary (or near contemporary) evidence, the following chart presents the full panoply of the ploughman’s feasts, with attempts to discern ‘hen-threshing’ and the like. The original verses can be viewed in this online edition of Payne and Herrtage.

What conclusions can we draw about early modern work, play and festivity from these ploughmen’s feasts, and what further questions do they spark?

First, we might view them in terms of classic historiographical approaches to festivals. Social histories of festive culture in early modern England (and Europe more broadly) often query, in a general sense, how far festive phenomena reinforced or subverted the social or political order through public action (Burke, 1978). In more specific senses, they focus on periods of contestation, when the very ideas and actions of festivity became the subject of political conflict. Early modern England was full of such periods, from macro reformations, revolutions and restorations (Hutton), to micro struggles over local enforcement of King James I’s Book of Sports (Marcus).

Tusser’s poem, in contrast, speaks more to festivity’s ability to inform the social order of a single household, rather than society as a whole. It also highlights the vital and enduring social importance of festivity, whether or not it happened to be a political football contested at the time.

Scholarly approaches to feasting as a reciprocal act informing social relations might be more pertinent here. Felicity Heal’s research on gift-giving, hospitality and charity in early modern England, for example, has highlighted how feasting and food-gifts ‘established and developed the bonds of good lordship and clientage’ in premodern society (2008:45). Most scholarship in this vein, however, has focused on the bonds between hosts and guests, tenants and landlords, and neighbours, often with an emphasis on Christmastide feasting.

Tusser’s ploughmen feasts stand somewhat apart in concentrating on the master-servant relationship, and in taking place outside the high holy seasons of Christmas, Easter or Whitsun. Indeed, most of his feasts had only a tenuous link to the liturgical calendar and, significantly, were characterised by blurred lines between work and play: ‘comfort with labour is fit to be had’. These feasts thus do not sit easily within classic labour-leisure models, where ‘pre-industrial societies had festivals…while industrial societies have leisure’ (Burke: 137; Marfany). If the latter was so, where did premodern festivals infused with work fit? Nor do they complement early modern elite understandings of play as antithetical to work, projecting instead a sympathetic view of play as essential to work identities and relations. A perspective perhaps indicative of Tusser’s experience as a musician and poet.

More broadly, the ploughmen’s feasts point to the complexity of the festive gift economy as a social and symbolic system. We know feasting informed early modern social relations, but the specific seasonal (not to mention liturgical) context of a feast could influence exactly which social bonds were informed and why. Tusser, for example, devotes a separate section of his book to Christmas feasting, highlighting the multi-lateral giving among various levels of society during that season [emphasis mine]:

At Christmas be merie and thankfull withall,
And feast thy poore neighbors, the great with the small,

This stands in contrast to the more pointed, downward giving to household servants during the ploughmen’s feasts (save perhaps sheep shearing, which included neighbours as well).

Lastly, if these feasts speak to the master-servant relationship, what do they say? For one, the latter should be definitively renamed the ‘dame-servant’ relationship, for Tusser makes clear that the huswife negotiated, managed and maintained such work relations. Elsewhere in his book, Tusser advises huswives how best to order, manage and discipline servants. But on the feast days, the shoe was on the other foot: feasts were both practical and symbolic manifestations of a social contract (a two-way exchange), epitomising what was owed the servant by ‘custom and right’ in this relationship. Tusser employs imperative after imperative to reinforce this point: ‘This must not be slept / Old Guise must be kept’. With a final flourish, he drives home the far reaching significance of these festive exchanges, not just to household cohesion and amity, but also to the essential premodern commodity of reputation:

This doing and keeping such custom and guise,
they call thee good huswife, they love thee likewise.

[¹] I have modernised Tusser’s spellings throughout this post, with exceptions here and there, when the early modern spelling helps draw a distinction between premodern and modern definitions (e.g. ‘huswifery’ and ‘huswife’) or contributes to meter or rhyme.

Thomas Tusser, Fiue hundreth points of good husbandry vnited to as many of good huswiferie…, (London, 1573).

Thomas Tusser, Fiue hundred pointes of good husbandrie as well for the champion, or open countrie, as also for the woodland, or seuerall, mixed in euerie month with huswiferie, ouer and besides the booke of huswiferie…, (London, 1580).

Thomas Tusser, Five Hundred Points of good Husbandry, as well for the champion or open country, as for the woodland or several; together with a Book of Huswifery…, ed. William Mavor, (London, 1812).