Skip to main content
College of HumanitiesHistoryResearchEconomic and Social HistoryBlog discussion timetable 2021/22Between commerce and self-sufficiency: the farming and household accounts of John and Marie Coke, Herefordshire, 1607-22

Between commerce and self-sufficiency: the farming and household accounts of John and Marie Coke, Herefordshire, 1607-22 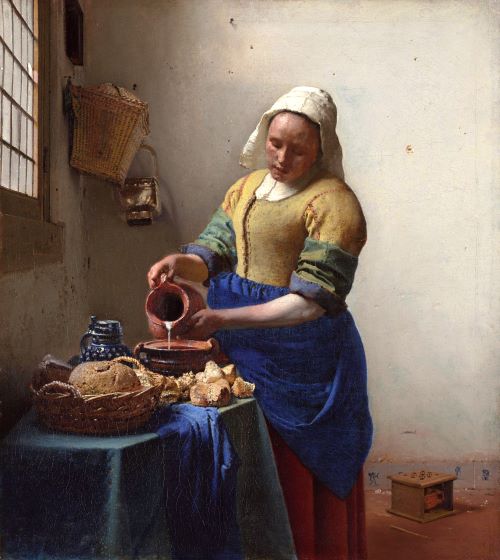 From the perspective of the household economy, economic development over many centuries can be understood as a long, slow transition from self-sufficiency to complete dependence on the market. As such, we tend to think of self-sufficient households as characteristic of the peasantry, and symptomatic of poverty and economic backwardness. Yet in the medieval England peasant households often confound our expectations. Rather than just selling the minimum crop needed to pay rents and taxes, and buy salt and iron tools, they tend to be rather more enmeshed in the market – for instance growing one crop for sale and then buying another cheaper grain to consume. The poorest households are perhaps the least self-sufficient: lacking enough land to grow their own produce and relying on food purchased with an income drawn from wage work or the profits of producing craft goods for the market. Yet, even when we look at later periods – in this case the early seventeenth century - there were many rural households in England that were partially self-sufficient, producing the bulk of their own foodstuffs. These households did not belong to the poor but to wealthy, prosperous farmers. They were not economically backward, but often used the latest farming techniques on well-capitalised farms. Such households adopted partial self-sufficiency as a consumption choice and as a strategy for saving money (thrift).

Wealthy households left written accounts of receipts, payments and production that allow us to see the economy of the partially self-sufficient household in motion. This blog focuses a particularly revealing (and therefore a-typical) set of accounts kept by John and Marie Coke for their household and farm at Hall Court near Preston in Herefordshire between 1607 and 1622. These accounts are interesting for a number of reasons. First, John and Marie Coke were both well-educated and able to keep careful, systematic accounts. Sir John Coke, formerly deputy treasurer of the English navy from 1599-1604, until he and his benefactor Sir Fulke Greville were removed from office by James I. As a professional administrator who had lost his role for largely political reasons, he seems to have taken out his frustrations in applying his accounting skills to his household and farm. His wife, Marie, was not just literate and numerate, but also capable of teaching their sons Greek and Latin. Second, the accounts consist of three types of complementary record, creating a particularly full picture. There are normal accounts which record payments and receipts – some kept by John and some by Marie. There are also weekly consumption accounts kept by Marie which record a running total of food and other consumables produced, sold and used (figure 1). And finally there are annual summaries listing receipts and expenditure, debts owing and owed, crops grown and how they were used, and a list of livestock (figure 2): these are particularly unusual, and remove some of the hard work normally needed to analyse accounts of this type. The third reason the accounts are interesting is the way in which they indicate the roles of husband and wife. The accounts of John and Marie can be distinguished by their handwriting and the two are interspersed, presumably as they each recorded their own activities – in other words they are ‘his and hers’ accounts, as described by Amanda Vickery for the eighteenth century. The final reason they are interesting is that, by gentry standards, the couple were not actually very wealthy, with an annual money income was between £140 and £215. This was ten times more than the income of a labourer, but ten times less than the income of leading county gentry. Sir John Coke was a younger son who made his living as an office holder and administrator, and during this period he had no significant post. Thus, he was reduced to the same income as a wealthy yeoman (i.e. non-gentry) farmer, but had the account-keeping skills of a professional auditor.

For this blog I have analysed a single year of the accounts: 1612. During that year the household consisted of John and Marie Coke and their three young children, and nine servants (five men and four women) most of whom provided farm labour. They also employed two male day labourers for most of the year. Graph 1 displays their sources of income. It shows that the value of home-produced goods consumed plus the value of farm produce sold made up more than half the household’s income in this period. Relatively little of their income came from rents, although they did receive a number of annuities and gifts which reflect their gentry status1. Their cash income came to £177. Graph 2 shows expenditure which in 1612 came to just over £2512. Under ‘diet and housekeeping’ expenditure included both purchased foodstuffs and the value of crops and livestock from the farm consumed at home. As they did not borrow any money and were not in debt, the difference between income and expenditure was the value of home-produced goods that they consumed themselves3: these were worth £74, or 78% of diet and housekeeping and 29% of total expenditure and income. The core elements of diet in this period were bread, beer, cheese, butter and meat. This household grew almost all the wheat, rye and barley used to produce bread and beer. Their bread was mainly made from ‘muncorn’, a mixture of wheat and rye which was also their main crop. They produced most of their own meat: pigs, poultry and cattle. A herd of milk cows supplied them with milk, butter and cheese. Home-produced grain and pulses were also fed to their livestock. Because this is Herefordshire, they grew large quantities of apples, some of which was made into cider, which supplemented the beer. In addition to this they also grew hemp and flax, which was used to produce 66 yards of cloth for use in the household4. As such the farm provided the necessary food and other supplies for household of fourteen people.

Nonetheless, it was also true that the Coke household was thoroughly enmeshed in the market, as evidenced by the multiplicity of commercial transactions described in the accounts: both selling and buying goods. Descriptions of the medieval peasant economy emphasise how the need to pay rent and taxes draw peasants into the market. In the Coke’s household, only a very small proportion of their expenditure related to such charges: almost £6 on rent and tithes, and a little less than £1 on taxes, making up 2.3% of their total expenditure. Much more significant was the amount they spent on labour for the household and farm: £14 on money wages and liveries for servants, and £13 13s 4d on money wages for day labour5. As they provided servants with board and lodging, and paid labourers partly with food and drink, these workers also consumed a significant proportion of the household’s foodstuffs as part of their wage payment, in addition to these cash wages. The household was not unaffected by global trade, consuming spices such as nutmeg, ginger and pepper from the far east, and selling an Indian quilt and roll of Indian taffeta (perhaps gifts received by Coke when he was in office?) to raise extra cash. While most of their purchases were made locally, John Coke visited London twice that year, and took the opportunity to buy cloth and clothing for himself and his wife each time he went.

The sale of farm produce provided a significant proportion of their income (23% of the total, or 33% of their cash income). While grain and apples were sold at market in local towns, many products were sold even more locally to neighbouring households in the locality, most of which were less wealthy, and included the families of the labourers they employed. Marie Coke’s accounts name at least 36 different people who bought apples, milk, butter, cheese, pulses, onions, goose-grease, lard and pumpkins from them. Both their general accounts and Marie Coke’s weekly accounts mix together records of receipts and expenditure, distinguishing them by using Arabic numerals for expenses, and Roman numerals from receipts (see figure 1). Many production processes were distinguished by a mixture of home-grown products and household labour with purchased services which provided particular skills. Thus they used their own barley to make beer, but paid a local woman, Goodwife Jenkins, for malting it ready for brewing. They also purchased hops to flavour it. They raised their own livestock but paid local butchers to slaughter their animals, and often purchased fresh meat from butchers (especially in the summer). They grew hemp and flax, and processed the plants into yarn, but sent it to a local weaver for weaving. Higher quality linen for clothing was purchased.

Aside from their extensive employment of servants, the Cokes’ partial self-sufficiency bears many similarities to that described in modern guides for people seeking to live a self-sufficient lifestyle. An example of these are the books of John and Sally Seymour, published in the 1970s and 1980s, and still being re-issued (a 2019 edition comes with an introduction by Hugh Fearnley-Whittingstall). Such guides do not strive for absolute self-sufficiency, but rather to home-produce and preserve basic foodstuffs, and to make the most of resources that were to hand on a small farm. Like those in modern England who buy smallholdings and seek to live ‘off grid’, the Cokes chose a self-sufficient strategy in an economy and society that offered them other options. Yet while the quality of the records left by the Coke household are exceptional, I do not think their lifestyle choice was. There is a great deal of evidence that many prosperous, rural households continued to produce their own food and engage in multiple forms of production and food (and textile) processing up until at least the mid eighteenth century. Such households were clearly not adverse to change, adopting new types of crops and household goods, and engaged in many market transactions. Instead self-sufficiency was a consumption choice and an actively chosen strategy that requires more acknowledgement and attention from historians. 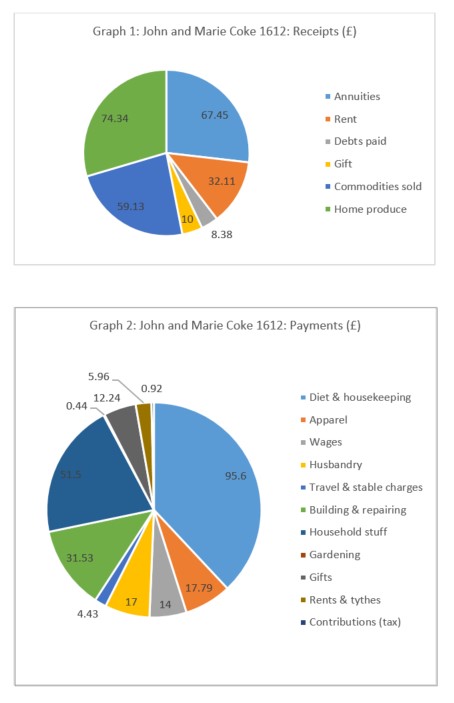 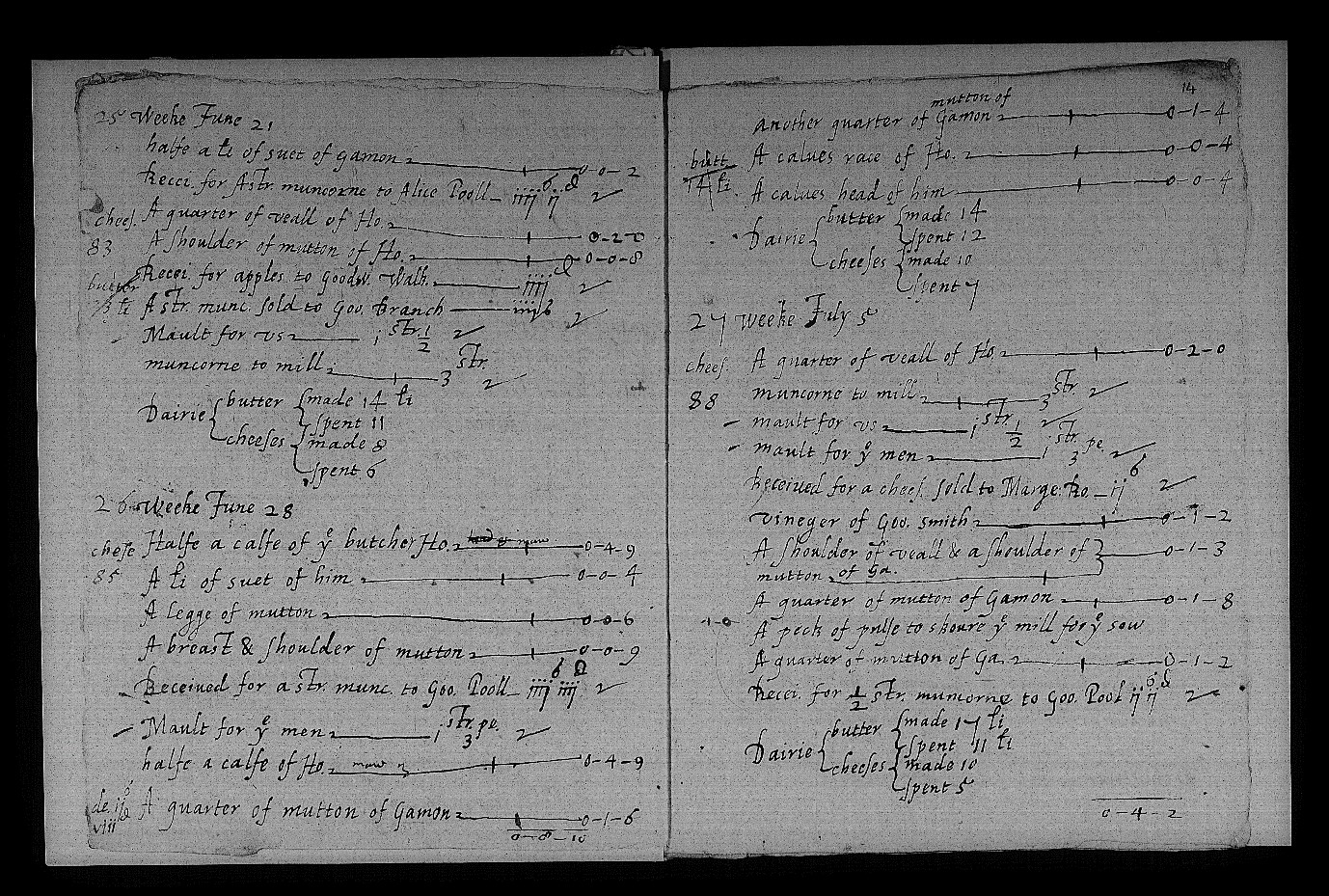 Figure 2: An excerpt of John Coke’s summary account for 1612 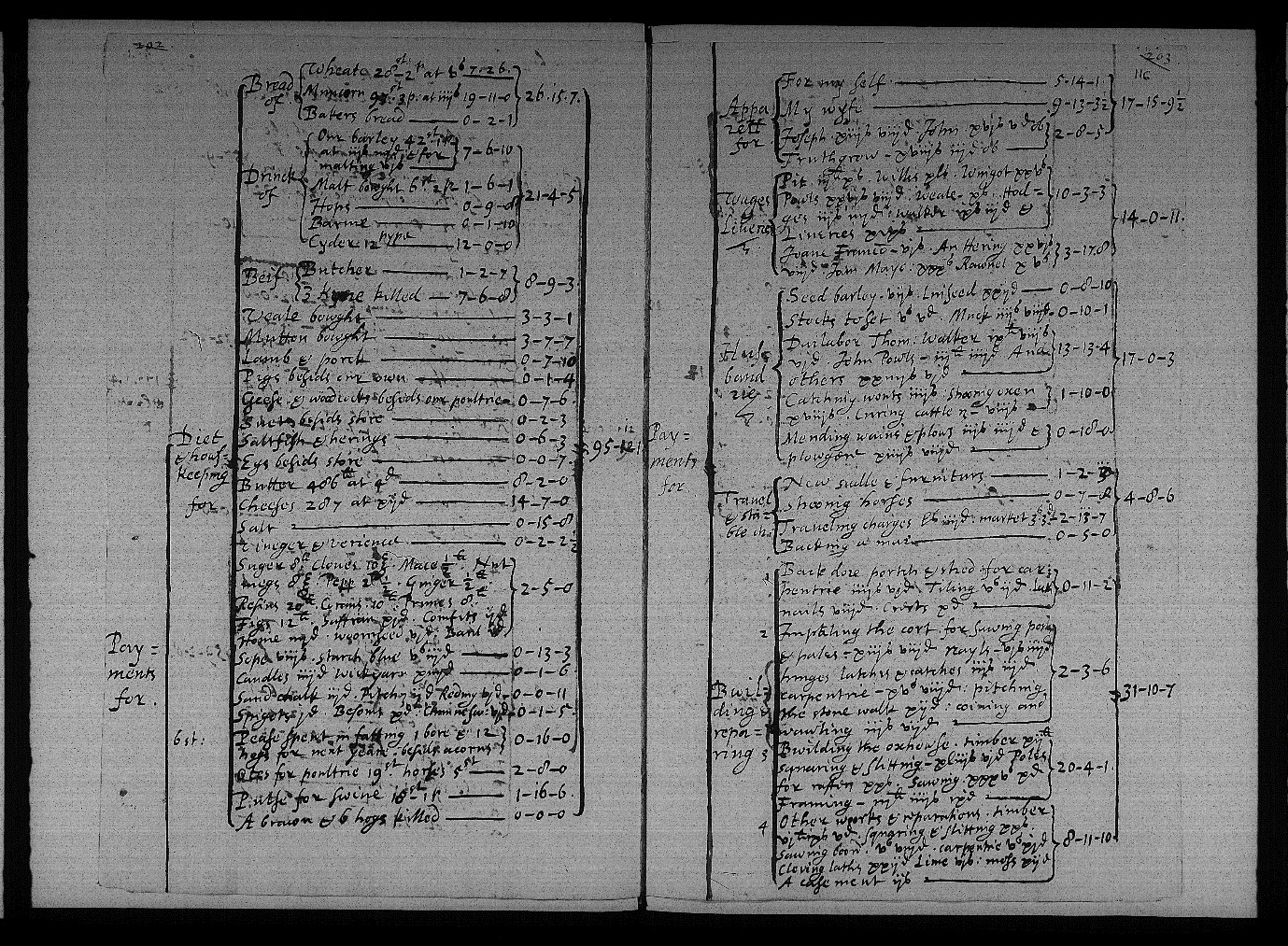 1 ‘Gifts’ always came from Fulke Greville, and are probably better understood as wages for administrative work John Coke did for his benefactor.
2 It was particularly high that year because they undertook some building work (costing £31.5) and were still decorating and furnishing parts of their newly built house (£51.5 spent on ‘household stuff’).
3 John Coke added a note explaining this in a later account.
4 This production was undertaken and managed on gendered lines – I don’t have space to describe this here, but am happy to discuss it.
5 In addition much of the costs of building and repairing consisted of wages.

Historical Manuscript Commission, The manuscripts of the Earl Cowper, K.G., preserved at Melbourne Hall, Derbyshire, twelfth report, appendix vols 1-3 (London, 1888-9). [These are John Coke’s papers. Vol 1. Contains transcriptions of letters for the period 1604-1622, including his letters to and from Marie Coke: pp.46-130]

John and Sally Seymour, Self-Sufficiency: The Science and Art of Producing and Preserving your own Food (London, 1973)

Amanda Vickery, ‘His and hers: Gender, Consumption and Household Accounting in Eighteenth-Century England’ Past and Present Supplement (2006), pp.12-38