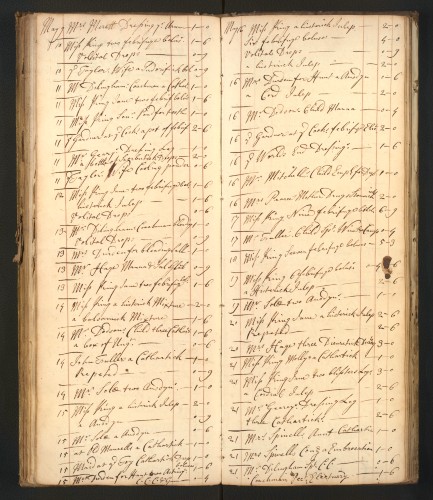 An increase in printed literature advising on how to manage accounts across the sixteenth and seventeenth centuries suggests that numerical literacy and accounting was increasingly recognised as an essential skill to manage a household. The author John Mellis, revising an earlier edition of an accounting manual published in 1541, warned that ‘where as lacketh order and guiding, there must consequently ensue great confusion and errour’. He recalls instances of informal reckonings made on scraps of paper and recalled by memory leading to legal suits in which roles were reversed with the money lender finding themselves to be indebted to the borrower. By 1675 Stephen Monteage penned a manual advising on accounting practices addressed to young scholars, husbandmen, farmers, gentlemen, shopkeepers, craftsmen and merchants. A skill once identified as belonging to lowly tradesmen and merchants was soon recognised as a key skill for gentlemen and a tenet of early education. Whilst the business accounts of merchants and gentry households attest to an increasingly professional and standardised form of accounting we have little evidence of the type of accounting that took place on a daily basis in commercial exchange. Written on scraps of paper or stored in receipt books often held in workshops, accounts of commercial credit for tradesmen and smaller households are rare. Debts owed to a seller could be marked on a chalkboard or scored into the wall of the local alehouse, worked out on a counter board, notched into a tally stick or simply counted with commonplace objects such as wooden spoons. When Monteage addressed the accounting practices of the farmer he confessed he omitted ‘many of their ways and Dealings, Bargains or Barters’ for he himself was ‘ignorant and untaught in their Mysteries’. These credit agreements and the accounting of them, the ‘Mysteries’ of everyday trade, are difficult to trace. The material objects associated with their counting are ephemeral and often it is only through probate accounts we learn of the existence of debt books, abacuses, counting boards or tally sticks on which reckonings were routinely made. Yet it is this quotidian credit and informal financial accounting that underpinned much of the commercial exchanges of the early modern period supporting what Fernand Braudel referred to as the ‘shadowy zone […] lying underneath the market economy’.

In this blog I draw on the incidental evidence found in ecclesiastical courts and recorded as part of the ‘Forms of Labour’ project that describe the types of financial management activities essential to the maintenance of the early modern household. Keeping written accounts has long been acknowledged in the historiography as a form of work. The maintenance of domestic financial records represented ‘hours of careful labour over years or over a lifetime, a commitment to a quantitative representative of the domestic’. Keeping accounts was essential for the maintenance of larger early modern households. Account books recorded rents collected, wages paid, expenses for daily consumption, credit extended and the interest collected on outstanding debts. Often accounts were structured around the social and charitable interactions of the household and served as a means to justify the profits of the author, producing an autobiographical account in which economic transactions were subsumed in personal introspection. Outside of account books written credit agreements, including bonds and bills of exchange, and debt books appear in the court records along with more informal forms of accounting such as the mental arithmetic required to ‘reckon accounts’ that relied on a shared memory of commercial exchange. The maintenance of these records constituted a form of financial management and alludes to the the everyday work tasks associated with the maintenance of a credit worthy household.

One particularly interesting case in the records, centred around the identity of a priest in relation to the collection of tithes in Danby, reveals through the incidental evidence of a witness the use of a debt book in a tailor’s shop in York. In 1571 in the city of York the draper Mr Caytome sold brown and blue cloth, totalling 8s 6d, to a priest. After the cloth was cut and handed over to the priest Mr Caytome turned to his son William and willed him to write the price of the cloth in his ‘debt book’ as the priest ‘had not money then presently to pay’. The priest had given a name of Michael Watson and claimed to be curate of Birdsall and had ‘subscribed his name unto the said note’ written by William in the debt book. The identity was false and the priest was uncovered as a fraud when John Posgate, curate of Greson, happened to pass him leaving the shop with the cloth in hand. He enquired with Mr Caytome and his son of the exchange and revealed that the priest was in fact one Simon Thyarkleby, curate at Danby. After an unsuccessful search for the priest through the streets of York, John Posgate pledged himself to the draper for the cloth and William amended the note in the debt book. When Simon was uncovered as having fraudulently contracted the credit he sent to Mr Caytome the sum of 8s. and paid in person the remaining 6d some time later. Upon revisiting the drapers the priest asked if William’s father would ‘be so good unto him as to blot out of his book his former name’, the entire exchange however, recalled William in his deposition remains ‘briefly noted in his said father’s debt book’. In refusing to blot out the encounter from the debt book, the actions of Mr Caytome and his son attest to the material significance of accounts as trustworthy forms of proof. Accounting manuals stressed the importance of accuracy claiming ‘the beauty of your Accounts consists materially in expressing the truth of every Transaction ; Let your Accounts be kept so, as if there be occasion to produce them before a Court of Judicature, you may be able to swear to the truth of them’. Ultimately the debt book remained true to the encounter and recorded the interaction with the priest including the attempted fraud.

Accurate accounting was imperative to both creditor and debtor. In the village of Hawkshead, Lancashire, in 1624 one Magson entered the home of Alexander Tomlinson tendering a debt he owed. With money in hand he demanded the return of the bond held by Tomlinson. When Tomlinson admitted he did not have the bond ready Magson refused to hand over the money. Without the accurate paperwork and the return of the creditor’s half of the bond, Magson might be liable to pay his loan twice, should Tomlinson have pursued him in the courts. In a case of usury in Thirsk, 1614, against a member of the clergy the deponents recalled how the cleric employed a clerk who drew up bills and bonds and kept for his own record copies of the bills in case the cleric sort legal recourse. These incidental details highlight the ways in which accounts might be used after a debt was settled and the importance attached to the material objects associated with credit. Bonds and bills were significant not only for the words inscribed on the parchment but also for their materiality, with both parts of a bond matching neatly along the torn lines.

Household financial management was not the preserve of men. Though the spread of numerical literacy was irregular, women were by no means excluded from the trend for numerical accounting. The account books of Joyce Jeffries and Sarah Fell from the early seventeenth century along with evidence from court cases such as that between Elizabeth Hatcher and Elizabeth Carter, explored by Alex Shepard, show that not only were women actively keeping financial accounts but that these extended beyond the remits of household management. The manual, Advice to Women and Maidens (1678), actively encouraged women to learn basic arithmetic and accounting. Women in the records appear to have taken an active role in financial management. In a case of slander in Chester presented in 1664, Margaret Henshall stood accused of slandering her husband claiming that he had ‘eaten or destroyed more than the whole family had done’. Her accusations of his poor financial management went alongside an attack on his masculinity, claiming she would rather kiss her own dog’s tail than her husband. In front of company she mocked her husband and boasted of her own financial independence, claiming she had lent sums of 60 li, 40 li, 6 li and 15 li ‘and that she had interest for it’. Money seems to be at the centre of the marital dispute and witnesses attest to the fact that John Henshall had in fact maintained his wife ‘in good fashion and to the best of his ability’. Margaret had three or four cows of her own and was granted permission to dispose of her husband’s corn and malt as she pleased. In 1692 in the vicarage of Weverham, Elizabeth Pickering performed penance for accusing John Pickering of the neighbouring parish of Middlewich of being an ‘arrand knave, a theife, & hath or has stolen out of my house a Book of Accompts’. Though not explicitly her own accounts, Elizabeth appears to have taken some charge over their maintenance and keeping at the very least.

The experience of female borrowing and lending differed according to status and wealth. Though the account books of gentlewomen attest to a group of elite female moneylenders who maintained a tight grip on their household finances, the experience of financial management in the day-to-day exchanges of women lower down the social order is much harder to reconstruct. Depositions that recall buying from female sellers in a marketplace rarely record the means of exchange. The wives of butchers were left to man the stalls at the market in York and fishwives on the beaches on the east coast of Scarborough haggled for trade. Yet the deponents give little indication whether they paid for their goods in coin or by credit. In most of these instances the buyer and seller were known to one another and imply a long standing commercial relationship yet we know from petitions to parliament over coin shortages and problems of small change that it is these very same small victualers and traders, predominantly female, who suffered when petty coins were scarce hampering their ability to give change and trade. In order to fully reconstruct the experience of female financial management from the evidence in the database more analysis needs to be done on those exchanges in which objects were borrowed or pawned and a closer investigation of the types of commercial activity involving women.
The accounts of the deponents in the court records highlight the range of activities associated with financial management in the early modern period. Categorising activities such as the verbal reckoning of accounts, the recording of sales in a debt book and the payment of a bond alongside the activities of more formal accounting draws together the wide range of work associated with financial management in the early modern period.