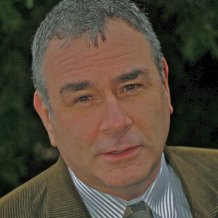 A University of Exeter expert will receive a fitting keepsake to mark being awarded the Freedom of the City for his services to history - the key to an iconic lost building.

On 30 November Dr Todd Gray MBE will be presented with a 3D reproduction of the key to Exeter’s East Gate during the ceremony, held to mark his tireless work to uncover Devon’s past.

Dr Gray has written more books on Exeter than any other historian – 14 of his 48 books are about the city – and his research has played a role in helping Exonians become more aware of their history and the ancient buildings around them.

The key was made by experts at the University of Exeter’s Digital Humanities Laboratory using a 3D printer. It will be given to Dr Gray by Exeter’s Lord Mayor, Cllr Rob Hannaford at the ceremony organised by Exeter City Council at the Guildhall.

Dr Gray was born and raised in New England, USA, but has been fascinated by Devon’s history after first visiting for a school trip in 1973. After completing his degree in London he moved to Exeter in 1984 to study for a PhD. He completed his doctorate in 1988 and has been a Research Fellow at the university ever since.

Dr Gray became a Fellow of the Royal Historical Society in 1992, in 2006 he became a British citizen and was awarded an MBE for voluntary services to Devon’s history in 2014. He has organised 12 exhibitions in Exeter’s Guildhall, including one featuring the Royal Salt, otherwise known as the Exeter Salt – the only loan ever made of the Crown Jewels or Plate from the Tower of London.

Dr Gray has organised more than 50 history conferences and has given nearly 2,000 public lectures in Britain, North America and Asia. He is, or has been, a committee member, chairman or president of Devon & Cornwall Notes & Queries, the Devonshire Association, Devon History Society, Devon & Cornwall Record Society, Devon Gardens Trust, Devon Family History Society, the Centre for South-Western Historical Studies and the Friends of Devon’s Archives. He is currently co-organising the first Exeter History Day to be held in 2019.

In the course of researching his books Dr Gray has examined every document collection in Devon’s three public archives - 16 linear miles of papers. He is also the only historian to have worked in all 80 local authority archives in England and Wales and his most recent book is based on material from archives, libraries and museums in the UK, the continent & North America. Dr Gray has led campaigns to ensure continued access to the public archives in Plymouth and Exeter.

This extensive use of archives has allowed him to shine a light on previously forgotten or overlooked parts of Devon’s history such as slavery in the late 1600s, the rise of fascism in the 1930s and the outbreak of looting in 1942. But he has also examined lighter aspects of history – two years ago he discovered forgotten Tudor swear words used in Devon and another Exeter word, quilling, is currently being considered for inclusion in the Oxford English Dictionary.

During the Cathedral Yard fire two years ago Dr Gray acted as an expert for journalists, explaining the history of the area during more than 50 interviews. He later organised two public meetings in the city for people to discuss the impact of the fire and his book, St Martin’s Island, written with Sue Jackson, is a lasting account of the fire and its aftermath.

Dr Gray said: "The history of the honorary freedoms of Exeter has yet to be written.  I have made an initial search through the records and have discovered that in the 1700s and early 1800s the Freedom was bestowed mostly on leading national politicians and military heroes.  A number of Prime Ministers - including Robert Walpole and the two Pitts - were given the honour and also leading admirals and generals.  The most famous of them was Nelson but the Duke of Wellington was another.  Exeter appeared to favour honouring those who fought against the American rebels in the 1770s.  The years of Reform apparently brought a cessation of the Freedom in the 1830s but it was revived at the end of the Victorian period.  Retiring mayors were then a particular favourite as well as Exeter’s bishops.  There were some interesting other individuals including Mrs Alice Vlieland, the tireless worker for women’s health in the early 1900s.  Captain Bell of HMS Exeter was also honoured: his ship was one of those that defeated the Graf Spee in the River Plate during the Second World War.  Winston Churchill was voted the Freedom in 1945 but he may not have collected it!

"It is a tremendous honour to be given such an award, particularly amidst such a group of distinguished men and women. It appears I am the first person connected with the University of Exeter to be honoured - Sir Steve Smith follows in a few months.  I have worked closely over the years with a number of groups and many colleagues and I feel I share the Freedom with them. Exeter has a vibrant history community and Exonians have a great interest in their city’s history.  If we have learned one thing from the Cathedral Yard fire then it is to appreciate those ancient buildings which survived that disaster and to look again at the others across the city.  I am deeply grateful to all those who played a role in my being given this honour."