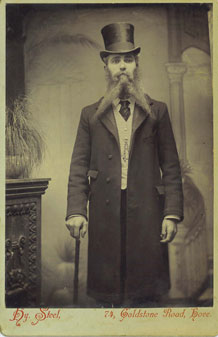 A man with a beard in Hove photographed circa 1895. Image courtesy of Henry Steel/Sussex PhotoHistory

Today they are a male fashion accessory, adored by hipsters and spurned by clean-shaven creatives. But in the 19th century, men associated beards and whiskers with manliness, strength and even male beauty.

Victorian men unable to grow beards or bushy whiskers down each cheek grew so anxious a market in ‘preparations’ guaranteed to increase facial hair flourished.

Beards and masculinity were so closely associated in the 19th century that some men resorted to wearing a wig with false ‘mechanical’ whiskers they attached to their face with springs and wires.

The 19th century mania for beards extended to side-burns and moustaches, inspired by hirsute soldiers serving in the Crimea, leading to the some of the first beard-grooming products.

They included preparations designed to make beards bigger and more luxuriant, Victorian “beard-generating” growth potions, a range of scented beard oils and even beard-dyes, according to research by Dr Alun Withey, a medical historian from Exeter University.

At the height of the 19th century beard craze, Victorian women even tried to emulate men and style their own form of facial hair.

'The Examiner' in 1863 reported "the new fashion for European ladies next winter will be the enlarging of their love-locks, and pulling them down over the cheeks in imitation of whiskers”.

Dr Withey’s research on health and the male body in British society is show-cased at an exhibition ‘the Age of the Beard’, hosted by the Florence Nightingale Museum in London. It features different types of 19th century whiskers and beards, including “soup strainers”, “thigh ticklers” and “Piccadilly weepers”.

Dr Withey said: "The mid-nineteenth century was a golden age for beards. After well over a century of being beardless, British men rediscovered a love for their facial hair. But growing a beard was much more than a fashion fad for Victorian men. It was in fact seen as an essential component of a man's strength and vigour.”

He added: “We think of beard oils and waxes as a modern thing, but there was a lively market for beard 'product' in the nineteenth century, including creams and lotions to soften and scent the beard, with others encouraging it to grow thick. Unfortunate men who were unable to grow theirs were either forced to slather on creams (like the so-called 'beard generator') or to buy one of the many false moustaches and whiskers that were becoming available. Some innovative inventors even patented mechanical devices using springs, to fix false whiskers firmly to the head.”

As early as 1800 a patent was obtained by Thomas Bowmen of New Bond Street for “Making perruques or wigs with fastenings made of a certain elastic compressed steel or springs, and also with other flat springs or wires made of steel, for the closer adhesion of the points and whiskers to the head and face.”

The device covered “the head, behind the ears, the forehead, the temple, the top of the cheek bones, and down some part of the cheek, as a substitute for that part of the beard generally left unshaved, commonly called the whiskers, are made to adhere to the respective part by means of certain flat steel springs made and tempered to a proper curvature.”

Dr Withey has also discovered examples of tinted wigs in Victorian times “with whiskers attached” using a “remarkable adhesion as cannot be discovered from nature itself.”

The beard became so important in Victorian society that Charles Dickens wrote a treatise on the importance of the beard called, simply, Why Shave?.

The academic has uncovered Victorian newspaper reports of women leaving their husbands because they “could not live any longer with a man who had no whiskers,” and desperate acts by men without facial hair.

In August 1895 Charles Owen Martin, a postman from Lee, was arrested after stealing a postal order to pay for a “bottle of whisker-producing compound” to produce “a pair of captivating, fascinating whiskers.” The postman used the stolen funds to pay for not just one “bottle of whisker-producing compound”. According to a press report, he “madly rushed after all sorts of preparations in order to force upon his face the bristles he loved so well.”

The report of his crime added: “His cheeks and chin are as smooth as a billiard ball. Not the faintest indication of a solitary hair has made its appearance on one or other of them and, as a consequence, his heart was sad.”

Dr Withey, Associate Research Fellow at the University of Exeter, is researching the origin of male grooming of the beard as part of his Wellcome-funded project 'Do Beards Matter?: Facial Hair, Health and Hygiene in Britain, 1700-1918'.

The Age of the Beard at the Florence Nightingale Museum in London continues until Spring 2017.