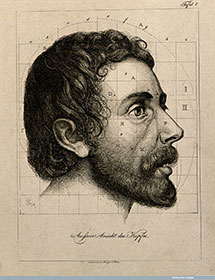 Dr Withey also looks to explore the relationship between facial hair and masculinity.

The body, according to the 18th Century

People in the 18th century were expected to look neat, elegant and have a natural shape, according to a University of Exeter academic who has found the period saw important changes in how society viewed the body.

Technology, Self-Fashioning and Politeness in Eighteenth-Century Britain, by Dr Alun Withey, a Wellcome Research Fellow, shows how in the second-half of the 18th Century new expectations came into effect about how people looked. In the book Dr Withey details personal grooming habits of the time and surgical instruments used.

Dr Alun Withey said: "The eighteenth century was a fascinating period of change, and one that saw gradual moves away from models of the body which had existed since ancient times. The book explores the ways in which people shaped their bodies to meet new ideals of appearance. As well as large devices, like the ones used to alter posture, it looks at the smallest instrument of personal grooming, like tweezers and nail clippers, and shows how even these mundane items have an important history".

The book coincides with Dr Withey’s current research ‘Do Beards Matter’, which covers facial hair and its relationship to health and hygiene in Britain between 1700 and 1918. Dr Withey is examining how beard grooming evolved, looking at images, portraits, personal sources such as diaries and letters, shaving advertising and theoretical texts written about facial hair over the last three centuries as part of his study.

Dr Withey also looks to explore the relationship between facial hair and masculinity, the role of medicine and medical practitioners in beards and shaving, and how shaving technologies developed, influencing shaving decisions amongst men.

The current research project was funded by the Wellcome Trust.

Technology, Self-Fashioning and Politeness in Eighteenth-Century Britain was released on December 7, and can be found here.