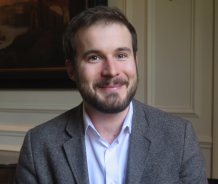 Research showing how 18th century Black intellectuals played a key part in the building of modern Britain has earned a historian a prestigious prize.

Dr Ryan Hanley, from the University of Exeter, has shown how the writers and campaigners were involved in shaping religion and politics, not only campaigning for the ending of slavery, between 1770 and 1830 – the time of the abolition movement.

His book Beyond Slavery and Abolition: Black British Writing, c.1770–1830, has been named winner of the Royal Historical Society’s Whitfield Prize. In the book Dr Hanley, who joins the university’s history department next term, examines how these black intellectuals became seen as celebrities by the public.

The writings, examined as part of this first study of pre-abolition black British writing, include poetry, songs, letters and essays.

The book challenges established narratives that focus almost exclusively on the role and views of black intellectuals of the time on slavery and abolition.

Dr Hanley said: “Black writers of the time are often neglected in history or only associated with slavery and the abolition movement, but they made an important contribution to politics, culture, and the arts and some even became celebrities. I’ve examined the network they lived and worked in, and found they were never confined to the peripheries of British culture. They helped to build modern Britain, working in the decks of Royal Navy ships to the drawing rooms of country houses, from the pub to the pulpit.”

The Whitfield Book Prize has become one of the most sought-after book prizes for early career historians. It was established by the Royal Historical Society in 1976 at the bequest of Professor Archibald Stenton Whitfield, who was a Fellow of the Society from June 1916 until his death in 1974. The prize offers an annual award of £1,000 for a work on British or Irish history that is the author’s first sole book publication.