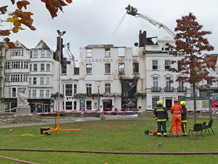 The Royal Clarence hotel was destoyed in a fire

Exeter residents will gather to celebrate the city’s historic buildings which still stand despite the recent devastating fire at an event this weekend.

University of Exeter experts Dr Todd Gray and John Allan will join buildings experts Richard Parker and John Thorp to discuss the tragic recent loss of historically significant buildings due to the fire last week, but also to discuss the adjoining architectural treasures which remain.

Dr Gray has organised the event, called The Royal Clarence Fire: the Historical Loss & Survival, under the auspices of Exeter City Council. It will be held on Saturday, 5 November at the Barnfield Theatre. Doors will open at 11:30am, the event starts at 12:30pm and finishes at 15:00pm. Admission is free and is on a first come, first serve basis.

Dr Gray will outline the destruction of the Royal Clarence itself, describing the events of the past few days. He has been a regular visitor to Cathedral Green, witnessing at first hand the ruin of one of Britain’s oldest hotels. John Allan, an archaeologist at the University of Exeter, archaeologist and historic buildings expert Richard Parker and buildings archaeologist John Thorp will then outline the significance of the surrounding buildings. These form an island of largely unappreciated medieval and later structures in the heart of the city. A panel discussion will follow.

Dr Gray said: “It is important that the members of the public have the opportunity to meet together and hear not just about the course of events of this destructive fire, but of the importance of other buildings which have survived.

“This event allows some of Devon's most knowledgeable experts on buildings to talk about the importance of these buildings which are still situated in “St Martin's Island”, a portion of Exeter around the Cathedral Close that escaped the Blitz of 1942.”