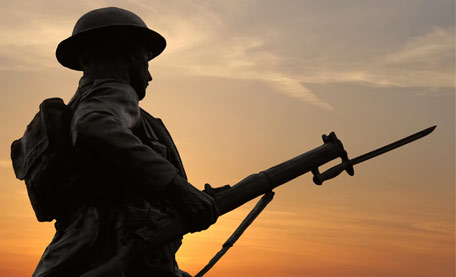 A prominent bishop and son of the former Conservative Prime Minister Lord Salisbury suggested political conscientious objectors in World War 1 should face the full horror of German bombing raids to “bring about a sudden conversion” from their views.

Lord William Cecil, the Bishop of Exeter, expressed his uncompromising views in a letter to the Times in October 1917 – just months after the first night time bombing raids had been launched by the Germans over London.

The Bishop, who taken up his position the year before, wrote of his unforgiving stance after visiting Dartmoor Prison, where 1,100 conscientious objectors were imprisoned.

A quarter of these were objecting on religious grounds, Bishop Cecil said they should go free but insisted the rest “either hated England…. or regarded it as a war of the Capitalists”.

Warning the prison has become a “hotbed of malcontents”, Bishop Cecil cautioned that such factions could stir up a rise in radical anti-war sentiment across the country that could “facilitate the organisation of revolution”.

In response, Bishop Cecil demanded they be “treated as enemies to our commonwealth”, as well as suggested that they be moved from Devon to parts of the country “frequently visited by the enemy airplane” as “dropping a bomb near the “Conchys” would perhaps bring about a sudden conversion” from their revolutionary views.

The passionate missive from the Bishop was set against the backdrop of the upheaval of the Russian Revolution – where the socialist Bolshevik uprising overthrew the Provisional Government in October 1917 – as well as crippling food shortages in England and growing numbers of casualties following the 1916 Somme and Verdun battles, and the 3rd Ypres Campaign of 1917.

Research conducted by Dr Richard Batten, a historian from the University of Exeter, suggests the letter from Bishop Cecil was a reflection of worries by politicians in 1917 that support for the war effort among the general population was declining.

Dr Batten said: “It is hard for us today to understand Bishop Cecil’s views, but they reflect the fact that a century ago people in Devon and other areas across the United Kingdom had become weary of the war and the increasing pressures that it continued to exert upon their lives. Others were fearful about the impact of the Russian revolution.

“The reaction of most people in Devon seems to be that they supported the war effort. As we remember the soldiers and sailors who fought in the war, we should not forget the trials and tribulations of people on the British home front.”

The Bishop wrote: “If the Government desire a revolution after the war they could hardly have proceeded in a more efficient manner. Eleven hundred men who have a grievance, fancied or real, against society, are assembled from all parts of England and there have ample time and opportunity to organise resistance, armed or passive, against the existing order of affairs.”

Bishop Cecil also alleged that the prisoners, whom he described as “men of ability and education” sang the socialist anthem the Red Flag rather than the National Anthem after meetings. He alleged they were “enjoying” the beauty of Dartmoor” while farmers were struggling to bring in the harvest.

Dr Batten’s research shows serious shortages of food items such as potatoes, meant some Devonians took matters into their own hands in order to attempt to increase food production in the county. Mrs Symons, a Totnes resident, grew potatoes in the unused plots of the consecrated ground in the cemeteries of Totnes and Tiverton. A Brixham inhabitant wrote to the Western Guardian to suggest there should be a widespread collection of seagulls’ eggs as a worthwhile alternative source of food.

Bishop Cecil wrote: “The feeling is very bitter throughout Agricultural Devonshire that the Government are feeding these men, who refuse to do even the primary duties of a peaceful citizen, namely to secure the food supply of the nation. They are enjoying the beauty of Dartmoor, with its lovely scenery, without even a khaki man to reproach them or a wounded man to shame them, while the poor farmer tries in vain with the few men that are left to garner the sheaves which the constantly returning rain is causing to rot”.

In 1917 politicians launched initiatives to encourage the public to keep supporting the war, including the National War Aims Committee. A newspaper report of a NWAC meeting in Exeter in December 1917 found by Dr Batten show the Conservative MP for Exeter, Henry Duke, reminded the crowd about the moral purpose of the war, and that they should be prepared to make greater sacrifices.

Devonians were encouraged to contribute to the war effort through buying war bonds and war loans. The Town Clerk for Exeter, Lloyd Parry, said the third War Loan, otherwise known as the 5 per cent War Loan, launched in February 1917 was enthusiastically taken up by Exonians. Later that year residents took part in Tank Week, where a model tank was paraded through the streets of Exeter to attract people to make applications for War Bonds. The event raised £40,400.

Conscientious objectors claimed the right to refuse to perform military service on the grounds of freedom of thought, conscience, or religion. In World War I, around 16,000 men were recorded as conscientious objectors, with Quakers, traditionally pacifist, forming a large proportion: 4,500 objectors were exempted on condition of doing civilian 'work of national importance', such as farming, forestry or social service; and 7,000 were conscripted into the specially-created Non-Combatant Corps. However, 6,000 were refused any exemption and forced into main army regiments; if they then refused to obey orders, they were court-martialled and sent to prison.