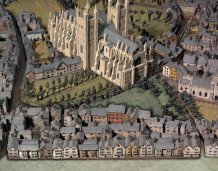 The parish of St Martin

The Royal Clarence fire a year ago meant the loss of a key part of the city’s past. But a study carried out following the disaster shows important evidence about Exeter’s history can still be found in the area surrounding the hotel.

Dr Todd Gray MBE, from the University of Exeter, has examined the continual renovation, redevelopment and adaption over seven centuries of the parish of St Martin – the area between Cathedral Green and the High Street, now mostly shops.  Dr Gray has studied who owned the buildings and their various roles over the years.

The area was mainly owned by the Dean and Chapter of Exeter Cathedral (and a group of other religious bodies), but after the Reformation buildings were rented in order to raise revenue. Some of the shop buildings in Cathedral Yard date from the 16th century and others are earlier.

Renovations after the fire in number 41 High Street, home to Laura Ashley since 1984, mean some painted decorations from the late 16th century in upstairs rooms are now more visible. Others are in storerooms including a male figure with a hawk, and St George with his dragon. There is also a toilet, thought to date from the Elizabethan era. The current building dates from 1564 and was occupied by a series of apothecaries (chemists), most notably Hinton Lake, nearly continuously from 1660 to 1974.

Some historical features have been preserved by accident – 46 High Street, now Thorntons - has not been lived in for nearly 150 years and the last occupiers’ Victorian wallpaper remains on the wall of an upstairs’ room.

The research, published in a new book commissioned by Historic England, entitled St Martin’s Island: An introductory history of forty-two Exeter buildings, shows the diversity of architecture in the small area. The buildings range from Laura Ashley, a towering Elizabethan tradesman’s home or shop constructed in 1564, Card Factory, built in 1883 in a Gothic style in a nod to the cathedral, and Santander, a mock-Elizabethan building constructed in 1907. The quality of the buildings show Exeter’s prosperity, and the affluence of this part of the city.

Dr Gray said: “Everyone was so shocked by the fire, and we all felt a sense of loss. It also made us remember how fragile our ancient buildings are, and I hope we all now appreciate those left more. Exeter lost a third of its ancient buildings during blitz, and now with redevelopment, fire and other destruction there are even less left. But they are still there. It would be lovely if more people looked up as they shopped in the high street to see the archaeological treasures above them.”

Particular trades dominated some buildings. Dr Gray has found 59 to 60 High Street and 24 Cathedral Yard have been involved in banking since the 1830s and 15 Cathedral Yard has been an inn, or hotel, for more than 250 years.  For several generations in the Victorian period Number 40 High Street was Exeter’s Italian delicatessen.

The parish of St Martin was left untouched during the Exeter Blitz and twentieth-century losses were nearly all caused by developers; this included several Cathedral Yard buildings that were protected by law but were nevertheless demolished.

Number 43, now Costa Coffee, has been used by number of traders including glove sellers, booksellers, drapers, stationers, grocers and jewellers. It was listed in 1974. The shop was built in the fifteenth century as a pair to Number 44. An extra storey was added in either the later seventeenth or early eighteenth century. The flat roofline of the façade disguises the pitched roof behind it. Records show shopkeepers lived in the building. The façade was given an “imposing new front” in the 1930s. By then the building had been ‘rebuilt on up-to-date lines” and operated as Pinder & Tuckwell for fifty years.

Number 39, now Sketchers, was owned by St James’ Priory until 1444. It was then acquired by a Cambridge college, served as a goldsmith’s shop through most of the 1700s, housed a circulating library in the early 1800s and became a bakery in 1890, which sold Eurissa, ‘a new bread, a white bread and best bread on earth’, which had been developed by W. A. Wrenn of Exeter”.