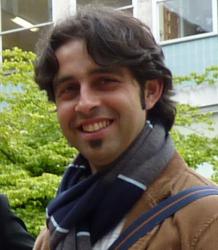 Dr Álvarez López obtained a BA and an MA from the Universidade de Vigo (Spain) before moving to the University of Manchester where he completed a further MA and a PhD in Medieval Palaeography. At Manchester he taught a range of modules across the departments of English & American Studies, English Language and Spanish. In 2011 he joined the University of Exeter where he has taught different levels at the FLC and Modern Languages on a part-time basis.

Aside from teaching Spanish language at Exeter, he has also held reseearch-based positions. Between 2011 and 2013 he was Palaeography Project Officer at the School of Advanced Study (University of London) as part of InScribe: Palaeography Learning Materials. Siimilarly, he was Research Assistant at the AHRC-funded project The Conqueror's Commissioners at King`s College London between 2015 and 2016. From 2015 he has also been an Affiliate Research Associate at Exeter Cathedral Library and Archives. As part of this collaboration, he obtained a Fragmentarium Fellowship 2020 to undertake his Exeter Fragments Project.

Fran's research interests and publications look mainly at the production, distribution and use of manuscripts in early medieval England and Spain. He is particularly interested in bilingual manuscripts and the circulation of codices between the British Isles and the continent. Finally, he has recently began work on the collection of medieval manuscript fragments at Exeter Cathedral Library and he currently holds a Fragmentarium Fellowship 2020 to complete his Exeter Fragments Project (digitisation and cataloguing of the medieval loose fragments at the Cathedral Libray).