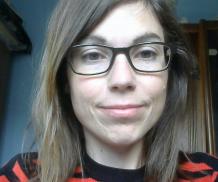 I joined the Department of English at the University of Exeter in 2014, having previously taught at Lancaster University and the University of Manchester where I completed my PhD in 2013. My main research interests include the works of John Milton, seventeenth-century religious lyric and affect, and the relationship between emotions and breath in the early modern period.

I am particularly interested in how prayer feels, looks, sounds, and even tastes, in the early modern period. My first monograph, Milton and the Early Modern Culture of Devotion: Bodies at Prayer (Routledge 2017), explores the representation of private prayer in Milton's poetry and prose in the context of seventeenth-century publications, such as religious lyrics and devotional manuals, paying close attention to prayer as a combination of spiritual and physiological processes registered in posture, gesture, and voice. I am also co-editor of the collection Forms of Hypocrisy in Early Modern England (Routledge 2017).

At the moment I am working on a new project: 'The Breathless Renaissance: Sighs and Emotions in Early Modern Literature, c.1560-1660'.

This project investigates the relationship between breath and emotions in sixteenth- and seventeenth-century England as represented in literary, religious, and medical texts. The project thus exposes a wide spectrum of roles that voluntary and involuntary breath was perceived to play including active, passive, communicative, apologetic, restorative, therapeutic, self-affirming, and self-annihilating. To define and analyse these roles, the project adopts a multi-disciplinary approach, examining literary and non-literary texts and highlighting in the process the interaction between religious and creative writing and medical theory. From Andreas Vesalius to Thomas Willis, from Ignatius Loyola and Luis de Granada to Luther and Calvin, from Shakespeare’s Hamlet and Richard II, and from Donne and Herbert, to Milton’s Adam, Eve, and Satan, the project investigates how inhalation and exhalation of air were imagined as connecting individuals to their communities, their readership, their natural world, and finally the divine.

The project is strongly interdisciplinary in its nature and scope. It builds on perspectives on the history of emotions and the history of medicine in order to account for breathing as a cognitive and sensitive experience. It focuses on the ways natural philosophers of the Renaissance, including Francis Bacon, Jean-Francois Senault, Walter Charleton, Timothy Bright, Robert Burton, William Harvey, and Thomas Willis, articulate a physiology of breathing that is then adopted and appropriated as a psychosomatic experience by writers, including Lancelot Andrewes, William Ames, William Perkins, John Donne, George Herbert, John Milton, John Bunyan. Lungs, hearts, veins, muscles, and vital blood, feature heavily in both contexts, conceptually and materially bridging the distance between medical, theological, and literary experience.

Description: From Poetry to Prayer

Seen historically as a way of maintaining a healthy body and mind through the expelling of melancholy, sighing is now fertile ground for psychologists to assess a person’s emotional state. For a history of the sigh, from poetry to prayer and health to ecstasy, join Pakistan-born poet Imtiaz Dharker, Dr Naya Tsentourou, who has studied the relationship between emotion and breath in the Renaissance, and Professor Corinne Saunders from the University of Durham.

Part of the 'Taking the Air' series, organised by the Life of Breath project

How does storytelling and reading impact on our psychological, physiological and social wellbeing? Taking the Air, supported by The Wellcome Trust, investigates ideas around breath. 1 in 5 people in the UK have a long-term lung-related illness and 115,000 die from lung disease each year. Together with our partners at Durham University’s Life of Breath project, we present a series of truly fascinating events looking at sighing, singing, poetry, air quality and taking our last breath. Events feature a range of authors including Sam Kean, Imtiaz Dharker, Michael Symmons Roberts and Havi Carel.

Contributor and speaker in BBC Radio 4, 'The Sigh', December 2016

Fellow of the Higher Education Academy