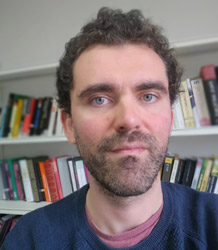 Lecturer in 20th and 21st-Century Literature

Rob Turner's research is focused on American literature, with a particular interest in experiments in the epic mode, ranging from Samuel R. Delany to Marguerite Young. Current projects include work on African American counterfactual writings, and the poetics of hip-hop.

His first monograph is titled Counterfeit Culture: Truth and Authenticity in the American Prose Epic Since 1960, and was published by Cambridge University Press in 2019 as part of the Studies in American Literature and Culture series. This book examines the trope of "alternative facts" in American fiction, tracing the long history of inauthenticity as a conscious national mode. Authors discussed in detail include Thomas Pynchon, Andy Warhol, Vanessa Place, and William T. Vollmann.

He is currently working on his second book, Hip-Hop in American Literature and Culture, an edited collection of essays exploring rap as a poetic medium. This volume will bring together a number of critics, examining the relationship between the MC and other traditions (from Senegalese griots to Nuyorican slam artists), and reading key methods and tropes in relation to currents in American oral and print poetry. The collection is scheduled for publication by Cambridge University Press in 2023.

Rob has also contributed to a collaborative poem, The Dionysiaca, to be published with University of Michigan Press in August 2022. This book reimagines the work of Nonnus, the 5th-century Egyptian epicist, and involves major contemporary poets and translators including Stanley Lombardo, William Levitan, and Anne Carson.

After completing his PhD at the University of Cambridge in 2015, Rob was appointed a Teaching Fellow in American Literature at UCL for two years. He is a regular contributor to the Wire magazine.

I would be interested in supervising research in any of the following areas:

Rob Turner studied for his BA and MA (Issues in Modern Culture) at University College London. After a few years working in classical music, he returned to academia in 2011, studying for a PhD at Emmanuel College, Cambridge, where he was supervised by Robert Macfarlane.