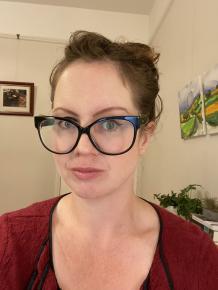 I am Lecturer (E&S) in 20th/21st Century Literature, a post I have held since September 2020. My doctoral thesis, “Tragedy After 1945: Affect and Labor in the American Novel,” was completed in the School of the Arts and Media at the University of New South Wales. Passed without revisions in November 2018, the dissertation was supervised by Professors Sigi Jöttkandt and Julian Murphet, and examined by Professors J. Hillis Miller and Stephen Shapiro.

I am currently revising that research into my first monograph, "Novel Tragedy," which examines a collection of postwar literary works and interrogates how the emergence of immaterial labor as the major form of waged work in the period—from creative and reproductive, through service and sex, to unemployment and new kinds of managerialism—is mediated into literary form as tragedy. Combining feminist literary theory with a critique of political economy, it argues that the aesthetic tendency toward tragedy is a reaction to shifts in capitalist accumulation during the twentieth century and the accompanying global reorganization of wage labor.

My current research has shifted its focus to world literatures and cultures within the same period. This work has been interested in questions of literary affect and commodity production in developing economies localized to South America, the Caribbean, parts of Asia, and parts of Africa. My work to date on this project has focused on West Africa—because, whilst I have been researching the material determinations of literary tragedy in the United States, the research has found itself drawn to questions of the transatlantic slave trade. My interest in immaterial labor finds its antipodean counterpart, without which it could not exist, in peripheral resource extraction, such as cacao, gold, timber, and palm oil. The argument I am pursuing is that, in the literary output of these regions, tragedy emerges once again, and that it does so as a genre that captures material exhaustion, both as it is experienced by living labor and as it registers as a geological or environmental crisis. I have forthcoming and contracted articles and chapters on Kazuo Ishiguro's sicence fiction and service economies,  lithium extraction and Chilean literary production, palm oil and West African myth.

I have also published on Cormac McCarthy, on Marxist Feminism, and I have a recent essay on the economies of care and the Covid-19 Pandemic.

I have an adbiding interest in critical theory and continental philosophy. In this capacity I have edited a special edition of Filozofski vestnik, Reason+Enjoyment.