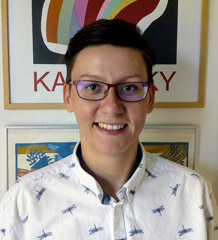 I work on the literary reception of anatomical and medical experiments in early modern Europe, primarily England, Denmark, and Spain. I am interested in contemporary satires of the early Royal Society in London and the Anatomy House in Copenhagen, especially the Neo-Latin critique of experimenting with humans and animals. My current postdoctoral project at the University of Exeter, 'Early Modern Satire of Experimental Medicine in Spain (1493-1700)', examines neglected Spanish satires of medical experimentation with transatlantic drugs. Prior to this position, I held a Junior Research Fellowship at Durham University, and an LBI Fellowship at the Ludwig Boltzmann Institute for Neo-Latin Studies in Innsbruck. I have published articles in Renaissance Studies, The Seventeenth Century, and Milton Quarterly.

I have taught undergraduate courses in Renaissance literature, poetry, Restoration, and eighteenth-century literature. I participated in the Writing Mentor project at the University of Leeds, where I provided individual tutoring to help students develop their academic writing skills. My teaching approach is highly interactive as I attempt to engage students in active enquiry. In my classes, the factual and theoretical background works as the backbone for the students' own critical input. Project-based learning and team work are crucial to my teaching as they utilise students' individual strengths in a collaborative setting, preparing them for life after university.

After obtaining an MA degree in English and Latin at the University of Zagreb, I received a FIRS Scholarship for a PhD in English from the University of Leeds. My thesis, 'Roman Satiric Modes in English Verse Satire, 1660-1740, with special reference to Swift's Horace and Pope's Juvenal,' incorporated materials from the Brotherton Special Collections. It is there that I encountered neglected Neo-Latin satires on science and medicine, which led me to designing a postdoctoral project on the topic of manuscript satires of science in 17th-century England. After a short fellowship at the Ludwig Boltzmann Institute for Neo-Latin Studies in Innsbruck, I won a Junior Research Fellowship at Durham University in 2018. Later that year, I received the Lisa Jardine History of Science Award from the Royal Society, which funded my archival research in the Royal Danish Library in Copenhagen. In 2019, I received the Santorio Fellowship from the Centre for the Study of Medicine and the Body in the Renaissance in Pisa. I spent the last few months of my Durham fellowship as a guest researcher at Aarhus University. I am currently a Departmental Research Fellow (Wellcome-funded) at the University of Exeter, working on a project entitled 'Early Modern Satire of Experimental Medicine in Spain (1493-1700)'.