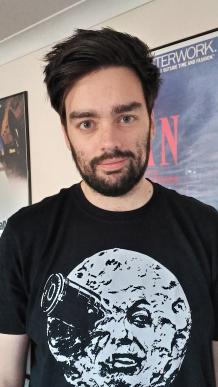 Dr Chris Grosvenor's research interests include silent cinema, British film history, exhibition studies and the work of silent comedian Charlie Chaplin. Chris has published his work in a number of academic journals including Early Popular Visual Culture, Historical Journal of Film, Radio and Television and Film History and his research has also been featured on BBC Radio Devon, The Sun, The Daily Mirror and ITV News.

His first monograph, Cinema on the Front Line: British Soldiers and Cinemas in WWI is due to be published by University of Exeter Press in 2021.

Chris is currently developing several research projects which draw upon multiple disciplines including English Literature and Screen/Media Studies. These include projects on transtextuality throughout the history of Sherlock Holmes adaptations across different media and the potential of the character’s use as a pedagogical tool within Adaptation Studies, as well as his next major research project, provisionally titled ‘Narcissistic Cinema: The Beginnings of Meta-textuality and ‘Self-conscious’ filmmaking in Silent Cinema’.

Beyond his academic work Chris is a keen film fan and critic, having written for numerous publications. He been involved with the establishment and organisation of an award-winning film society where he resided on the film selection committee, produced promotional material, including literature and short films, and introduced screenings for audiences of hundreds.

Cinema on the Frontlines: British Soldiers and Cinema in World War One, University of Exeter Press (expected 2021)