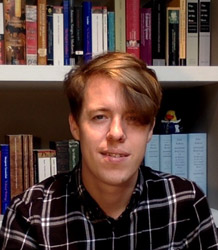 I specialize in literature of the seventeenth century, and particularly the English Revolution. I am interested in how literature negotiates ideas of sovereignty, political obligations, public rituals, and social cohesion in a period when such concepts were radically tested.

My book Poetry and Sovereignty in the English Revolution was published by Oxford University Press in 2020.

Since completing my D.Phil. at Oxford in January 2016, I have taught literature in the period 1550-1830 at Oriel College, Oxford, first as Graduate Teaching Assistant, and latterly as Departmental Lecturer. I moved to Exeter in 2017 on a Leverhulme Early Career Fellowship; as of 2018 I am now a full Lecturer at Exeter.

My current research explores how writers fashion political and communal allegiance in the mid-seventeenth century.

One abiding interest concerns how writers are involved in articulating ideas of emergency and necessity. These key terms shaped the politics of crisis in the 1630s and 1640s, but which have to be imagined and defined through rhetoric (but also through poetry and drama). Writers involved here include John Milton, Edmund Waller, and John Denham.

My other ongoing project asks how ideas of social belonging were forged through the experience of public ceremony in the period. This study will focus on non-dramatic performance texts--especially poems and speeches--designed to proclaim communal identity on ceremonial occasions. A pilot study, on the wedding poems of Robert Herrick, won the Review of English Studies essay prize in 2016.

My first book, published in 2020, is entitled Poetry and Sovereignty in the English Revolution. It explores the representation of sovereignty and obligations in poets who moved away from royalism following the defeat of Charles I in 1649. It sets out new readings of key works by Andrew Marvell, Margaret Cavendish, John Dryden, William Davenant, and Abraham Cowley, and charts their interactions with the ideas of Thomas Hobbes. The book derives from research originally undertaken for my doctoral thesis, but substantially expanded and revised while I held a Departmental Lectureship at Oxford, and a Leverhulme Fellowship at Exeter.

I organised a major conference on 'Literature and the Early Modern State', held in Cambridge in April 2019.

I currently convene and teach on the module Renaissance and Revolution (EAS2080), exploring the intersections between poetry, drama, and political power--and the radical upheavals this underwent--during the seventeenth century.

I also teach on Life and Death in Early Modern England (EAS3179), exploring representations of the life-cycle and social life, primarily in early-modern drama.

I welcome discussions about undergraduate dissertations on any subject relating to early-modern poetry and drama, but especially relating to Milton, Marvell, the Civil Wars, Restoration drama, early-modern religion and political philosophy.

Other modules I teach on include Rethinking Shakespeare (EAS1041) and Academic English (EAS1040).